I am not obsessing about APPL unlike some. I am still quids in, and after the roller coaster rides I have had in the market, I am very sanguine about stocks going up and down. This is mere bagatelle. Plus, given that I have finally come to the realization that I will never be rich, I kind of ride with the punches, and I get punched a lot. Plus, the market on the whole, is doing great. Thank YOU, Mr. President. 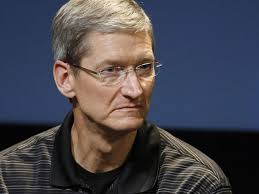 Given that I listen to CNBC/MSNBC while having my protracted morning cup of coffee, in bed, and then CNBC while I am doing my daily ablutions, I have heard a fair amount of commentary about APPL and the reprobate Cook who appears to be cooking the books. Mad Jim Cramer agrees with me. There was SO MUCH AAPL could have done, on the call, on Wednesday, to prevent the blood bath. They didn’t. They have abrogated their fiduciary responsibility. Mark my word, mark this day. There will be class action suits about this. No, I don’t have the money and no longer the contacts to make that happen. But, I am sure there are others that realize that this was a dot.com era heist.

But, then it came to me in a ‘Road to Damascus’ flash. Yes, of course. Corny Cook is supposed to fail. Steve Jobs’ wanted him to fail.

Steve never recovered from the John Sculley debacle. It scarred him for life, and he was easily scarred, though he hid them well.

He wanted his legacy to shine. Wanted people to say: ‘This would never have happened with Steve‘.

And people are saying that.

Steve, the genius he was, carefully picked Cook knowing that he was, at heart, a duffer and would fail, spectacularly.

He has. Steve, yet again, was RIGHT. Thanks Steve.

1 thought on “Apple (APPL) The Only Plausible Conspiracy Theory. Steve Wanted Cook To Fail. He Has. QED.”