Was he set up by his curial speech writers?

If the two words are so ‘close’ why risk using it in a speech. Can you see Obama’s speech writer putting in a sentence that goes: ‘we should all duck when Common Core is brought up by the Republicans …‘.

It was stupid. I think it was Freudian. What do they say, sex crosses the mind of a male every 30 seconds? He may be pope but he is still a man. Of that there is no doubt or debate. If he was God or even part-God we would know about it. Which begs another question, doesn’t God have the time to listen to ‘HIS MAN’ speak? You would think if God was listening he would have sent down a peel of thunder to deafen the WORD.

Very strange. And don’t forget Italian is NOT foreign to him. He is of Italian descent and prefers to speak Italian.

This diner is in the same Route 1, South Portsmouth (2454 Lafayette Road), plaza as the Cinemagic theater — where we went to see ‘Frozen‘ yesterday. I had already told the kids that we can go out for dinner. So as soon as we came out from the movie, though it was only about 3:50 pm Teischan starts with usual ‘I am hungry’. So we decided to have an early ‘dinner’ — actually my lunch since I had not really eaten all day. We had seen the sign for the Diner, with the ‘Now Open’ banner when we had driven in. I suggested that we walk over and check out the menu. Nice, quick walk from the cinema. We got there just before 4pm. They are closed from 3 – 4 to enable them to get ready for dinner. But, when they saw us by the door, ‘Ramona’, who ended up as our waitress (and is shown above), came rushing out and opened the door. We couldn’t refuse. She was very outstanding. Very pleasant. She enhanced the whole dining experience.

I am partial to Diners especially on my my (now) 15-month low-carb diet. The menu featuring classic diner fare, with the obligatory ‘all day breakfast’ (albeit sans pancakes after 11:30 am (to Teischan’s chagrin)), was appealing, well laid out — and the prices were decent. We were told that the beef, turkey etc. is fresh and prepared in the kitchen. The food was good. I tried their special, Cincinnati-type chili with my burger (sans the bun). Wow. It was good. Nicely seasoned. A faraway taste of a mild, delicate curry. I would say that they are on par with the ‘Red Arrow‘ in Concord — one of our all time favorites! So, that has to be good right? Deanna and Devanee had their usual BLTs and Turkey. Teischan had chicken nuggets — though she was full from the popcorn she ate watching the movie. Nonetheless she had room for chocolate cake. Though I didn’t taste it — I am told, with assurance, that it was good.

The diner has only been open for 9 days. It is a restored diner from the 1950s. See images above and below (and click to read them). The owner ‘Roger Elkus‘ (above) for there. Deanna and I, separately, went and congratulated him. I told him the one thing (other than the all day pancakes that was missing). Crayons and coloring things for the kids. He understood.

Very pleasant dining experience. The place hummed. You could feel the buzz. It filled up quickly. Warm, airy and not packed (as can be the case in some diners). The service was outstanding. Yes, we will go back. We might even make the Cinemagic in Portsmouth our default cinema (as opposed to Hooksett) just so we can hit this diner after the movie.

Bottom line we were impressed.  Another good option for Portsmouth. I am glad. 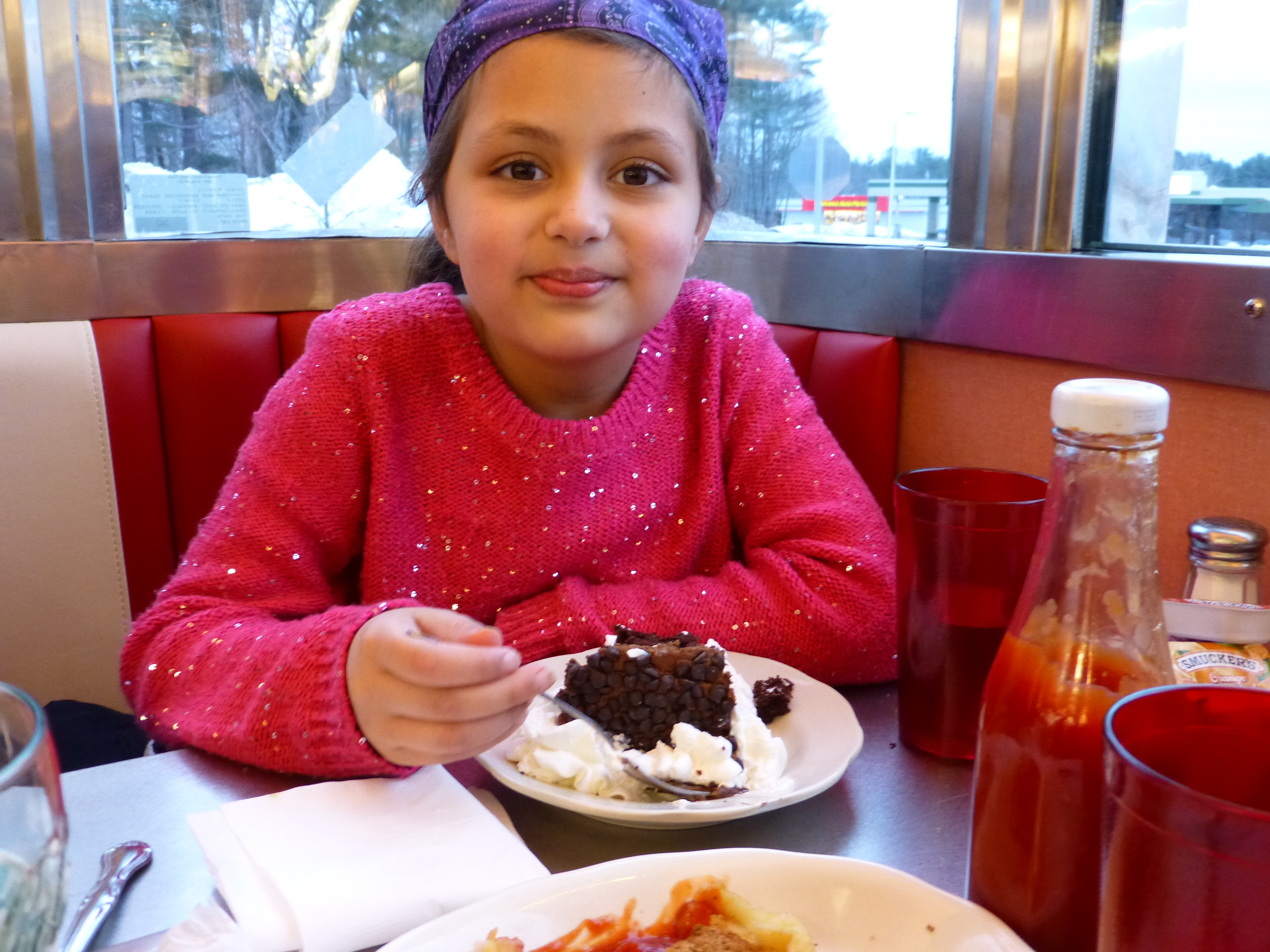 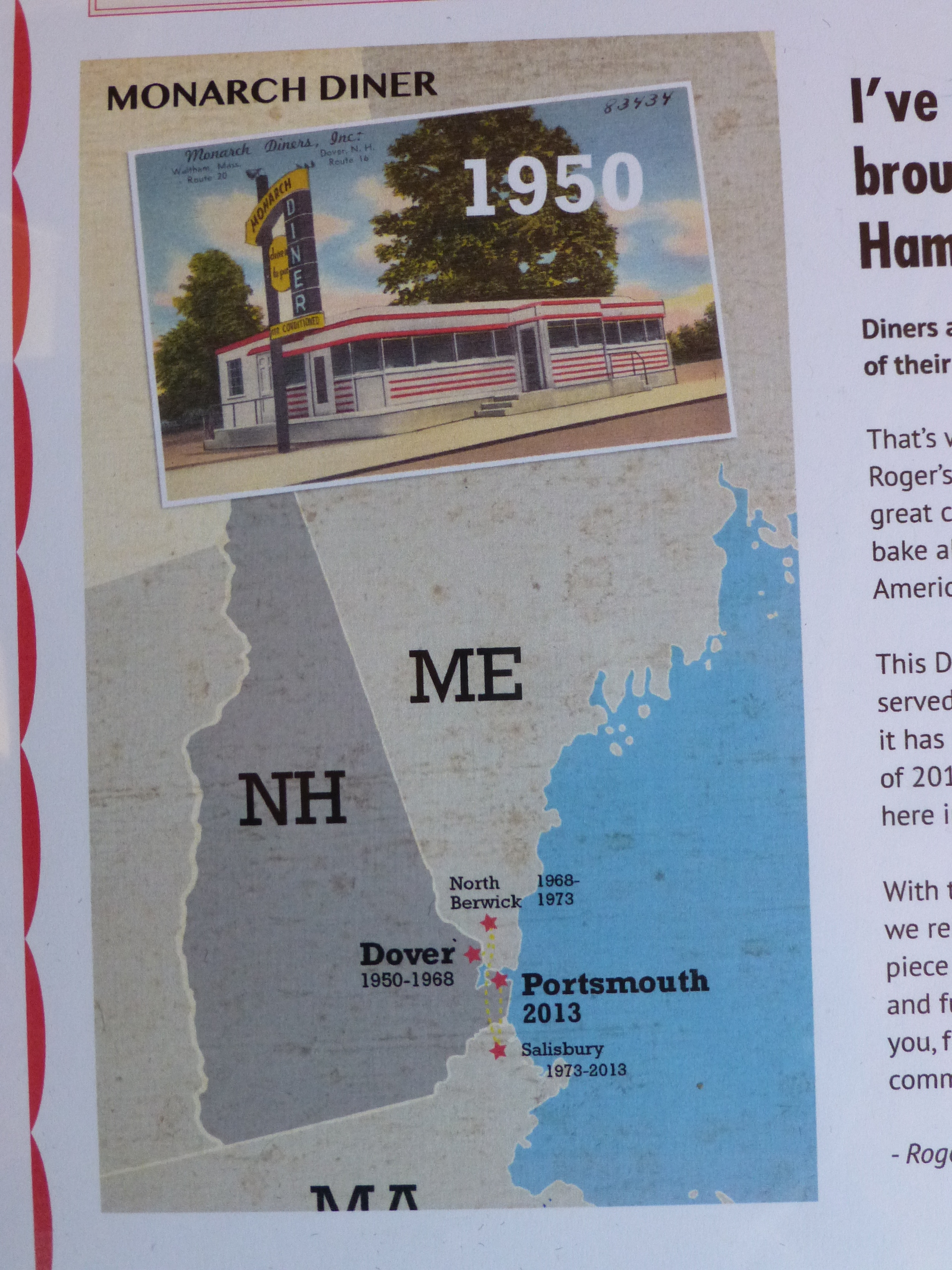 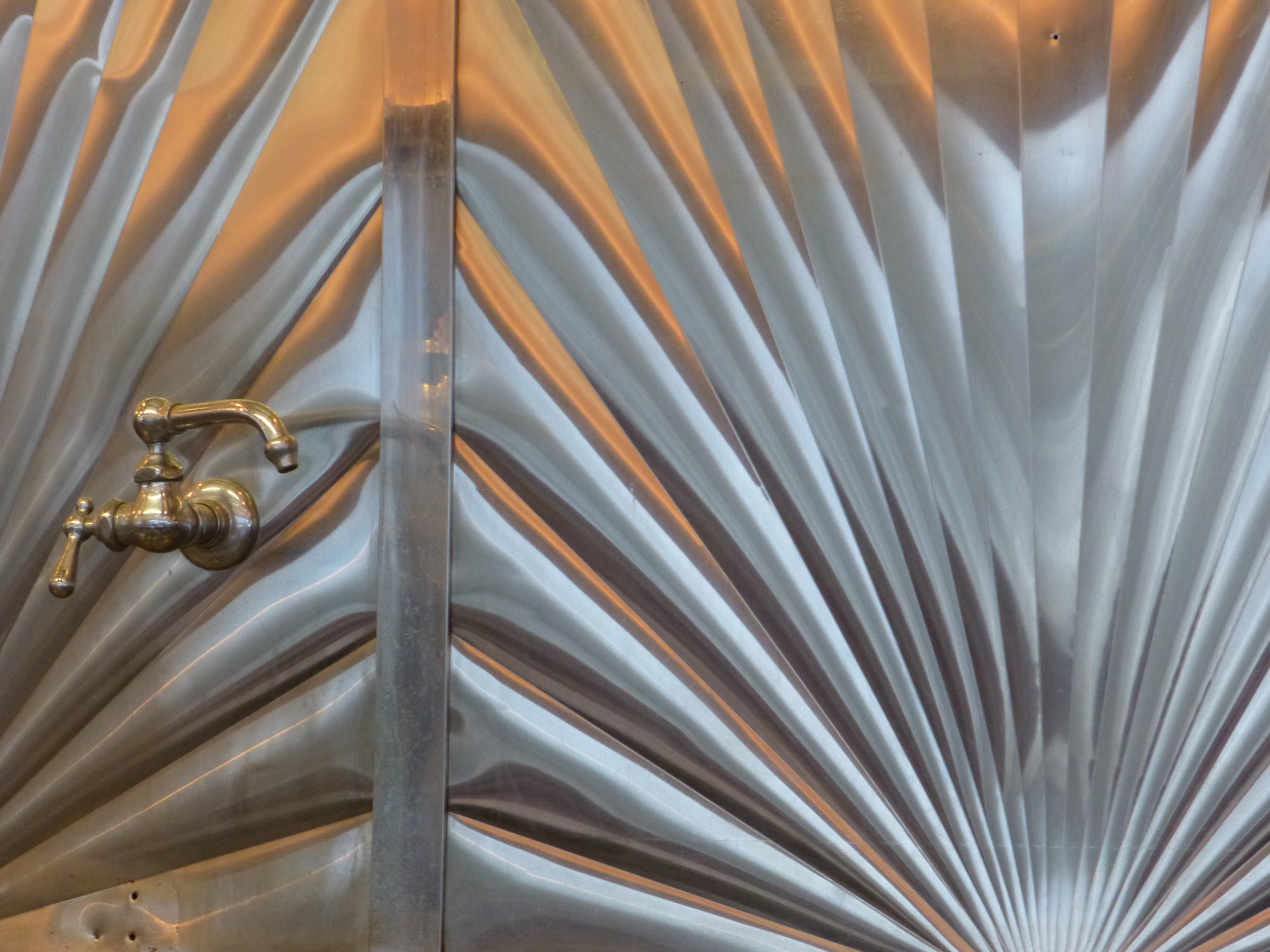 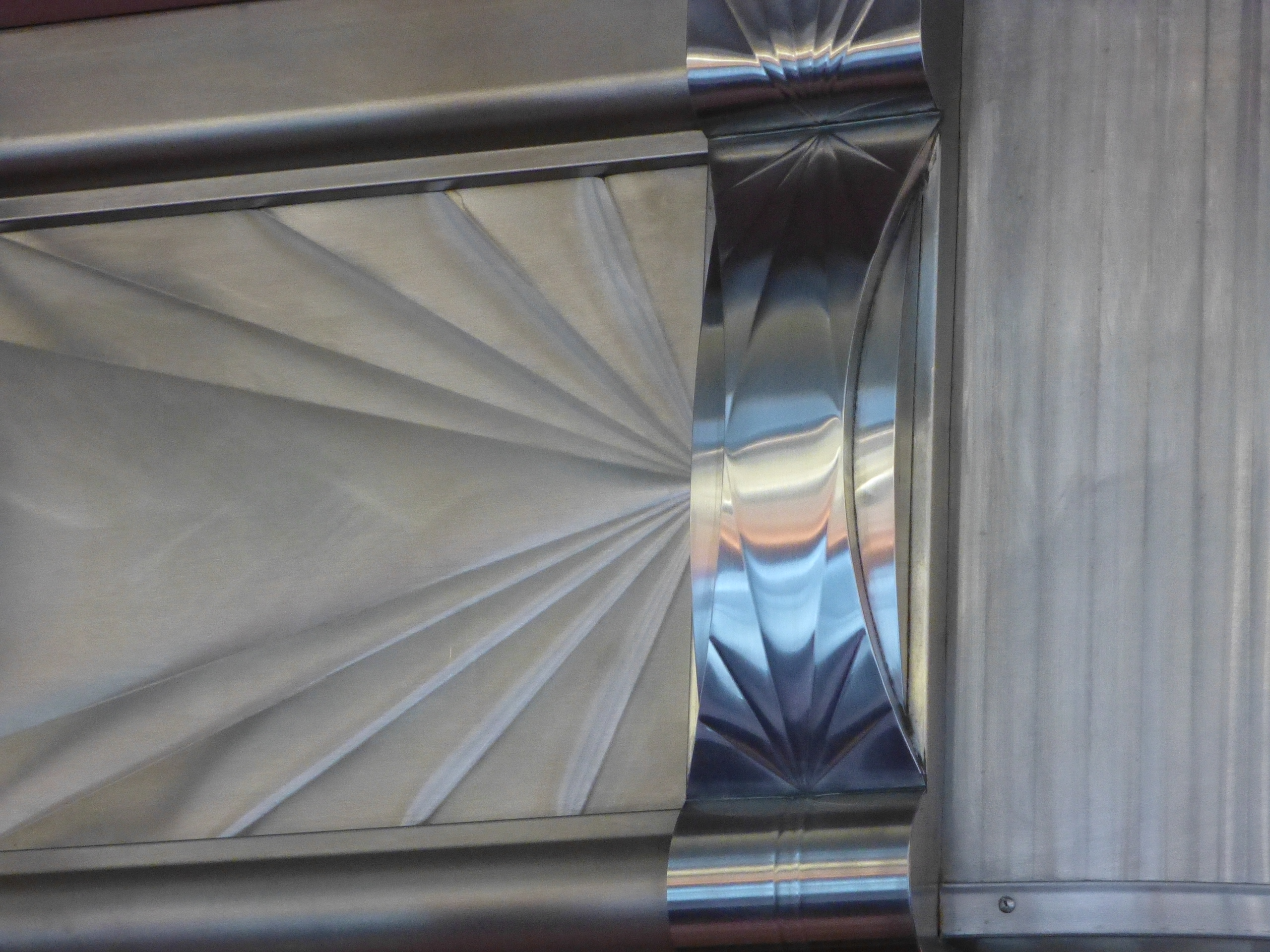 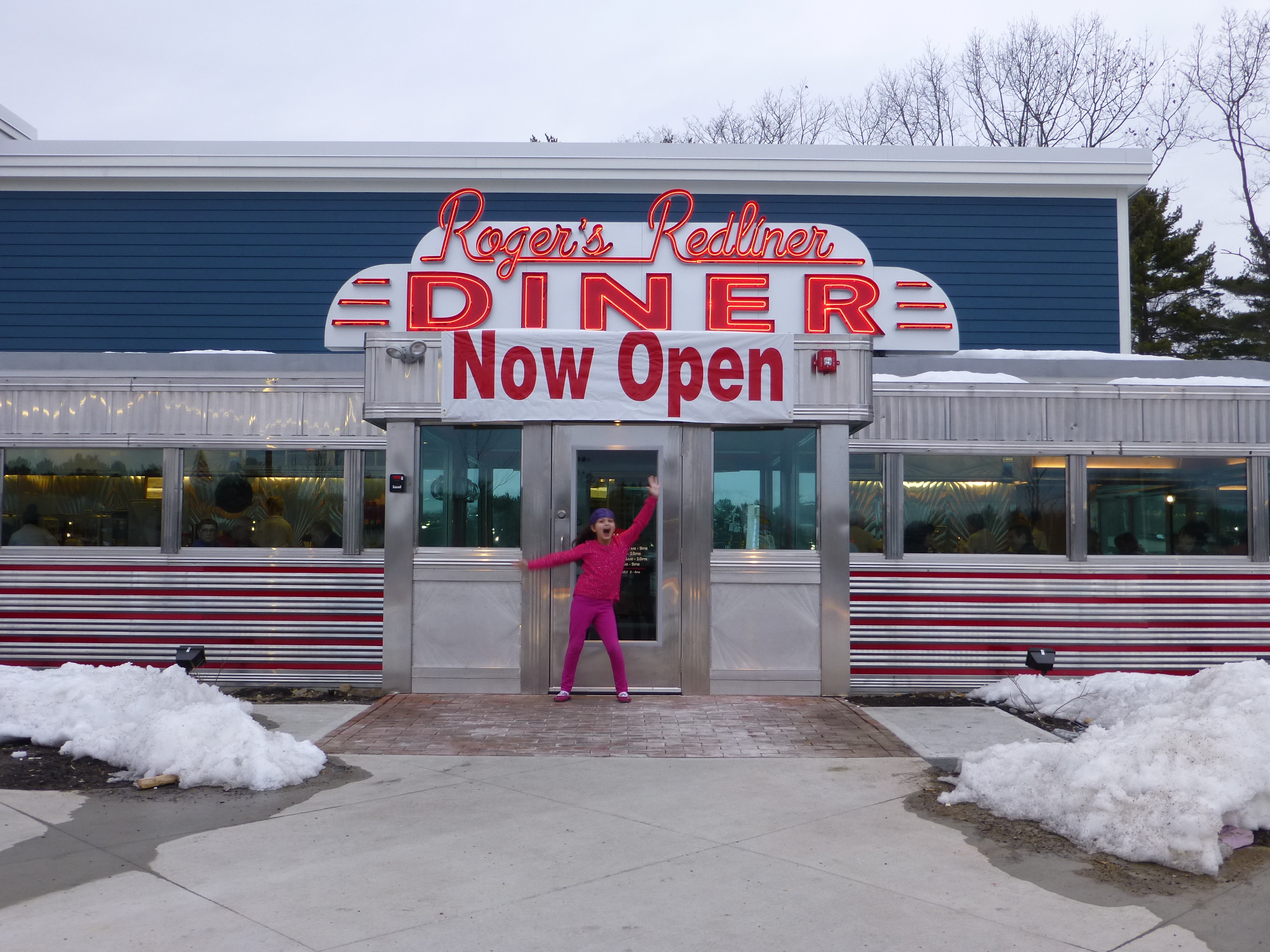 Though Deanna & I watch ~90 minutes of movies (pre-recorded on the DVR) each night, we don’t go to the cinema that often — and when we do it tends to be in clustered spurts. So, I felt bad that the kids, or more to the point Teischan, got duped because “The Lego Movie” was such a let down. Though she claimed she ‘liked’ it, her real feelings about it came out a couple of days later. I asked her whether she would like to watch it again when it was available on ‘TV’. She immediately said ‘NO’! As any of you who have had kids know, they have an infinite capacity to watch animated classics such as Nemo, Toy Story, Beauty and the Beast etc. etc. ad infinitum. So Teischan’s lack of interest in seeing ‘Lego’ again tells it all. It was a dud. I kind of felt bad. Felt that I had deprived her of getting her cinema treat.

For whatever reason ‘Frozen’ had not registered with ME until I saw the posters for it when we went to see ‘Lego’. Appears that the kids knew it and the songs from it well. Both Teischan and Devanee wanted to see it. Deanna wasn’t that keen but relented. It was the last day of their February, mid-term vacation and I felt that I had earned a ‘break’ after getting the Kindle version of “Pope John XXIII: 101 Facts & Trivia” published on Friday night.

Rather than going to Cinemagic Hooksett again (and that there was a dead body in the woods behind while we were watching ‘Lego’ kind of creeped me out) we decided to go to Portsmouth for a change — we go to Bedford/Manchester so often, I like a change. So we ended up at the new Cinemagic in south Portsmouth — on Route 1. Easy enough to get to. Seems nicer than the one in Hooksett.

Frozen was GOOD. Now that is what a modern animated movie is supposed to look like. They didn’t have it in 3D. So had to see it 2D. Color, detail, texture and lightning were perfect. Really showed how poor the ‘Lego’ movie was. Cute little story. Good songs and music. Kids loved it. Some will say it is a girl’s movie. But isn’t that true with many of the Disney classics? Then by that token, ‘Lego’ was a boy’s movie and that is not good or fair. Right now I have two girls who love Lego.

Well, it was a good 2 hours. A rejuvenated and expanded Disney classic (from the 1930s, I would think), with a title somewhere along the lines of “I Love My Horse”, which was shown as a ‘trailer’, was very, very clever. Showed off today’s cartoon creating technology to a ‘T’. At the end when they showed the credits, for what was probably just a 10 minute clip, I was amazed by the number of people it had taken to make it. Wow. Talk about labor intensive and that with all of the supercomputers

It was a good two hours. Nice diversion. Then we discovered a really nice, brand new (i.e., open just 9 days), diner in the same plazza.