As I made it quite clear yesterday, as a father, I feel dreadful about the tragic loss of of these two innocent kids: 8 months & 2 years. I feel for the father. This is the worst nightmare. I know that I will not shock anyone by saying that I am sure that he wishes that he had died in the crash too.

I hate to bring this up, but it is, of course, germane! It says they were coming home after a holiday weekend. He rear ended a truck — obviously with sufficient force to kill three, and I hope the kids were in car seats at the back. Was he ‘OK’ — and I am trying to use an euphuism.

Now, alas, we come to PRAYER.

The pope has not been having a good time with prayers of late — if, indeed, he has ever had any luck with prayers.

As I documented here, just last week, Francis is now backing military force in Iraq AFTER publicly stating that he was PRAYING for peace in Iraq. Again, remember, my concern here is that THE POPE is not any ol’ superstitious, ignorant schmuck. He is the Vicar of Christ. He is said to have the inside track with God. So when the Pope prays you would expect that God listens.

So, now, yet again, the Pope is telling us to pray. I am totally and utterly confused. What are we praying FOR? The two kids should be FINE … right? They should already be with God.

In situations like this, what crosses my mind is … shouldn’t HE, i.e., the Vicar of Christ, have been doing a better job praying. To me it is a bit late now.

PLEASE, don’t tell me that God doesn’t micro-manage, “free will”, we don’t understand God’s marvelous ways etc. Fine, if SO … why is Francis asking us to pray.

You can’t have it both ways.

I don’t pray. If I did I would pray that they do not find the Pope’s nephew ‘negligent’.

Enough said. I wish the Pope some peace. WISH … not pray.

I am not going to give this disgusting ‘ambulance chasing’ book, by two New Zealanders, any publicity, let alone credence by mentioning the titles or the names of the supposed authors. They should be ashamed. I was very surprised that they were from New Zealand. New Zealanders, on the whole, are very honorable sorts — with a lot of integrity, dignity and credibility. You only have to think of the likes of Edmund Hillary, Richard Hadlee, Glenn Turner, Bev Congdon et. al.

The basic premise of this book that the MH370 Captain Zaharie Ahmad Shah was insane, that he barred the first officer, Fariq Abdul Hamid, from the cockpit and then proceeded to suffocate the passengers and crew up cutting off the oxygen supply is TOTAL, ludicrous speculation — not based on an iota of fact. To make such claims is disgraceful.

That Zaharie Ahmad Shah then managed to land the Boeing 777, intact, on the ocean, à la  Capt. Chesley B. “Sully” Sullenberger’s ‘Miracle on the Hudson‘, is more conjecture. The Indian ocean, for a start, is NOT the Hudson. This is their theory as to why no wreckage has yet to be found. It is STUPID. At some stage the plane would have started to take water and sink. Boeing 777s are NOT built to be watertight and float. Water would start seeping in through the wheel wells for a start. So at some point the LARGE plane would start to sink. Then the laws of physics would kick in. Just see what the ocean did to the Titanic once it started going down. Bits of the plane and then eventually larger portions would have got ripped off. There would be enormous water pressures and dynamics due to gravity at play. The 777 would have broken up, into sections, before it hit the bottom. That is a given. Then there would be a lot of things that would float up — and it is best to not even think about it.

This book is a disgrace. Do NOT buy it. Do not pander to these shameless snake-oil salesman.

Click here to VOLUNTEER. It is a load of fun. Very rewarding.

Not sure whether they are going for a record this year. 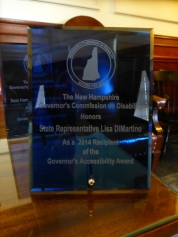 This weekend, August 23, 2014, is Gilford Old Home Day and Lisa is, of course, marching in the parade. Get out there and root for us.

She has asked us to join her and the current consensus is that we all will. Not sure whether that will help Lisa.