We needed 250 chairs — arranged. We had to haul, I think, at least 120 from the basement and loft. Well we knew the drill. We had done it earlier in the month for Lori McKenna. We set up the ‘chain gangs’, with the kids at the end, and we had all those ‘suckers’ moved in no time. It was fun. Great camaraderie. I, as is my wont, had brought a cooler with ‘refreshments’. It is thirsty work. A good time was had by all.

But, of course, we can go if we want to. Crazy busy — like triple ‘booked’.

Last concert. Wow. I am kind of sad though we may have some ‘intimate’ folk concerts during the winter. That would be good — when there is snow on the ground.

I just saw the obituary.

Of course we knew he was ill and had cancer.
Yes, we knew it was ‘aggressive’.
We never thought it would be this quick.

We feel a tremendous loss.

He was my eye doctor since 2001 when I met him at Laconia Rotary.

He was Deanna’s eye doctor since we got married in 2003.

He is the ONLY eye doctor the two kids have known.
He was SO GOOD to them.
Many years ago Devanee got a minor paper cut in her eye at school
— in Gilford.
The school wanted us to take her to an optometrist.
It was like 2pm in the afternoon.
Jim saw her immediately.
It was late, past 5pm. But he spent so much time.
And I think he REFUSED to bill us!

Jim was very good to us.

He liked my pope books.

We would always chat.

As I said, exactly a year ago, I consider him THE BEST
optometrist in central New Hampshire,
and as that post explains I am no stranger to
good eye doctors having had ones in London’s famed Harley Street
and Boston’s Boylston Street.
I also have had eye doctors in Nashua, Manchester and Concord.

He was quite the man.

He did so much good.

True, salt of the Earth.

Jim will be truly missed — but remembered and commemorated with affection and respect. 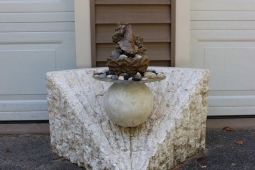 In my never ending quest for knowledge I love to learn from others. For me it is a very quick and productive way of learning. So with this new Canon, albeit cheap and refurbished, I wanted to gain as much hands-on knowledge from experts, ASAP. As ever I lucked out. J. Richard Hale, who I have featured here, a Canon photographer himself (and who got me to open my eyes to Canon (as opposed to just looking at Nikon)), helped me yesterday with a series of e-mails. Thank YOU, Richard. He is one heck of a guy — a retired MIT Physicist. Thanks to Richard I now also have Google Picasa! That is kind of funny. I can’t tell you how many times I have installed and uninstalled Picasa in the past. I find it a BIT TOO intrusive, as are all Google products of late, for my liking — BUT I was impressed with its image manipulating capabilities, which is what Richard had stressed.

I then ‘bribed’ John into coming for dinner and taking the camera for a spin. We owed him another dinner anyway for all of his help on matters numerous. John Bishop is a yet to be fully discovered photographer. John, like Richard, is a Canon fan and has a Canon 50D. So John came last night, and around 7pm went outside and shot 34 images. He liked the camera. We checked the images out, untouched and in JPEG (rather than in RAW) on Teischan’s Toshiba laptop. We liked them. We also did some Googling and discovered that today’s T3i is considered to be on a par with the six-year old 50D — despite the threefold price difference. That made me happy because I only paid $336 (all told) for this refurbished camera. John thinks it is OK.

I need to put a UV filter (which I do have) etc. And I need to read the manual. That is the problem. Time. But, I will. For now I am going to use it in Av (Aperture Priority) mode. I am used to that from 40 years ago. I know the numbers though it is SO MUCH easier today with all the digital display information.

So … that is where we stand. I guess I will keep this camera. Yes, there is always the possibility that I will convince myself to upgrade BUT I am going to do my best not to. I had my last camera for 8 years.

Anyway I took about 20 pictures yesterday. All in JPEG at the 18MB maximum resolution. The above two were among the firsts. I was using fully automated mode.

This is a picture I took, yesterday morning, after Richard had suggested that I try the camera in Av mode. I did. This was at f/22.

I hope the ‘MP’ in the YouTube title is a TYPO rather than some rank ignorance by the ‘YouTube HotNews’ crew. Yes, David like all British Prime Ministers is an MP — Member of Parliament, BUT his main title is P.M., viz. Prime Minister. For the record he is the M.P. for Witney in Oxfordshire in the heart of England (and I do mean England).

Wow. What a wonderful, stirring, inspirational and heart-warming performance.

Bravo, David. Bravo. YOU might even convert me back to being the ‘right of Margaret Thatcher‘, never missed a vote, arch British Conservative Party stalwart I once was!

It wasn’t Churchillian BUT neither was it Obama (of late) or George W. Shrub. And he always looks more respectable and grounded than good ol’ Bill (but that isn’t hard to do). I am sure Churchill would have approved and be proud of this ‘young’ man. On a scale of 1 to 10, IF Winston, by definition is a ’10’, then David today was at, at least, a 7.5.

Made me proud to be British, but as I have repeatedly stated I don’t need any excuses for that because I am proud and grateful to be British on a continuing basis.

Of course I am concerned about the situation in Britain, BUT it was reassuring to hear David say that WE are not strangers to this. And isn’t that the truth. I lived through much of the IRA attacks and had been to Harrods the day before, and parked in the same street, as what transpired there.

David used the word ‘kinetic’ in one of his responses to a reporter’s question. Ah! David. Brilliant. I just looked up his bio. WOW. Eton and Oxford. Yes, he would know how to use ‘kinetic’ in the right context — which he did. Bravo, David. Thanks to YOU, if I was back home and had to vote I will vote Conservative, JUST because of YOU, irrespective of my feelings on some issues.

Thank YOU, David. YOU ARE THE MAN.

Wow! The 2014 season is over. It was a blast. We had so much fun. Meeting Gordon Lightfoot was a treat. The ‘cruise‘ and the ‘after party‘ on our beach was so much fun.

The blast concert — and it is sold out. I am glad.

Yes, though we hadn’t originally signed up we (i.e., the kids and I) are going, by request, to help with the setup. We now have a reputation for being the chair hauling gang. It should, as ever, be fun. In reality we didn’t go to that many concerts in the end — though we could have gone to all. Crazy busy Summer. I never made it to a single concert at “Inn on Main“. Well there is always next year and I am hearing talk that we might get a winter concert or two.

Well, here is to you all. What a great Summer. Thanks.

I am impressed. I doff my hat to the pope.
Way to go Francis. Good move. I am proud of you.

Suffice to say I am very familiar with the ‘Little Ratzinger’ — the BIG Ratzinger now the ex-pope. But to be fair to the little guy he was a marginal papabile way back in 2010.

Quite a few ‘Little Ratzinger‘ & ‘Tanned Ratzinger‘ posts on
‘Popes and Papacy‘.
Do a search on ‘Little‘ or ‘Tanned‘ for some of the posts.