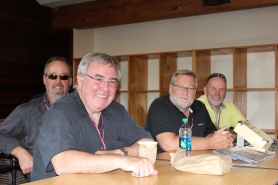 Trademark “The Brigadoons” on Sunday of the 2014 ‘Highland Games’ at Loon [New Hampshire]. This is a 2 minute video clip, by Deanna Guruge, that captures the more traditional Glengarry ‘Celtic’ flavor of this very talented and engaging group. You really should watch and listen. Click to access the YouTube video. Denis Carr is in fine form and Paddy Kelly (extreme right) is having a ball.

Another video clip, again by Deanna, of “The Brigadoons” at Loon, on Sunday. This at 3 minutes is longer and is NOT one of their traditional numbers. This is “The Brigadoons” showing what great all-round entertainers they can be. Denis, of course, is in fine form but Paddy Kelly really goes to town in this piece with movements, sounds and pantomime. Classic. You will laugh. Barvo. Click to access YouTube video.

Two video clips, now on YouTube, from the 2014 ‘Highland Games’ at Loon.

Deanna shot both of these.

I shot still pictures with my Canon.

These two videos, in my opinion, don’t really do them ENOUGH justice!
They are even better.

Here is my photo montage of still images from that same concert.

It was 11 months ago, i.e., October 20, 2013, that I made the promise that ‘within the year’ I would migrate most of my Web hosting from GoDaddy to another platform.

With the new ‘WOWNH‘ Website on Weebly yesterday I fulfilled that promise with time to spare.

Yes, since last October, when I was ticked off by GoDaddy’s policy of charging existing customers more to renew their hosting than they were charging new customers to setup accounts, I have migrated 3 Websites from GoDaddy: teischan. com, guruge.com and now wownh.com. I now only have one paid Web hosting account at GoDaddy and that is for ‘popes-and-papacy.com‘. I am NOT going to migrate that site cum blog and that was always part of the plan. Two reasons: it will be quite a bit of work BUT, moreover, I COULD end up losing the superb Google ranking I have with that blog. That would be a shame. So I will suckup and pay GoDaddy for that hosting.

Last November, after considerable research, I went with Yola. Yola appeared to be very cost effective and provided enough of what I wanted. Well between November of last year and April of this year I did four Websites on Yola — one a professional site that I created for a fee. But Yola has proved to be a disaster. I am totally disillusioned with Yola. So around July I was again FORCED to start looking around because I needed to migrate guruge.com from GoDaddy. Yola, Weebly & Wix had been my short-list last November. Plus Wix had started doing some powerful TV advertising. So I was gravitated towards trying them. Not sure why BUT Wix just doesn’t appeal to me. It really is chemistry. We just don’t seem to click. Also they really, really PUSH for you to move your domain over to them. I don’t want to do that. That was definitely a strike against Wix — the pressure they exert to have you transfer your domain name.

So I went with Weebly. Weebly, as I have already said, is not perfect. It is also a tad expensive. BUT it seems to work, it is FAST and it (as I had read in one of its reviews) can be strangely compelling BECAUSE it as a satisfying feel to it.

I, optimistically, had given myself a MONTH to migrate wownh! Yes, a month. So the schedule was get “Popes: 101 Facts & Trivia” printed then spend up to a month migrating wownh. Well I got it done in a day, actually half-a-day — and that REALLY was a bonus for me. So yesterday, after I approved the print version of the book I started messing around on Weebly — and that is always how I start a Website. I mess around. Dabble. Dig. Prod and experiment until I have about 1/4 of a reasonably working page. Then I get serious. There were a few tricks in Weebly that I had forgotten. That was bad and an issue. But once I remembered how to get things done it was pretty fast going.

wownh.com is really a placeholder. I don’t really need it. But I have had it since 1998 and my e-mail, which I have also had since 1998, is tied to it — though I still retain my e-mail with GoDaddy. I have had wownh.com for longer than I have had guruge.com! wownh was for “Waiters on Water”. Up until 2008 we used it quite a bit and it had TONS of family pictures … Then came Facebook and blogs …. I hid the pictures using ‘long URLs’. But the need for even that disappeared. There were better ways to share pictures. So the new wownh is really more about nostalgia than anything else. I got the most basic of Weebly packages for it because I didn’t need anything fancy — other than domain mapping. So that is the story. Not sure I will do much more on wownh. I might add more pictures of Ulysses. Deanna will probably want me to do so. That might be it. Thought about adding pictures of the Lake. But that would just be a hiding for nothing in terms of my time. BUT now with wownh done in a DAY I have a few days ‘FREE’. WOW.

I am old fashioned when it comes to books. As such I like to see my book in print even though I fully appreciate that the market for printed books is in decline. Thanks to Amazon’s “CreateSpace” (and others of its ilk) getting a title for ‘Print on Demand‘ costs nothing — if you do all the work (which I do). So as soon as I had the Kindle version published (along with three updates) I started working on the print version.

I wrote both the “Pope John: 101 Facts & Trivia” and “Popes: 101 Facts & Trivia” in print format rather than the free-flow, ‘no-formatting-to-speak-of’ form required by Kindle eBooks. I like tightly formatted books and as such writing in print format is more satisfying to me. And that is what counts. So once the book is finished I have to create the Kindle version by copying and pasting my formatted version into a freeflow document. To me that is easier than the other way around — i.e., adding formatting to the freeflow version.

So after the Kindle I am 80% there in terms of the print version BAR the index! I now have a semi-automated method for creating my ‘Partial Index’. I use the very powerful search capability of Adobe Acrobat to find all the occurrences of the terms I want to include in the ‘Partial Index’. But it still takes me about two days to get the index done.

I had the Kindle version up on Amazon on Wednesday night, September 17, 2014 — ahead of the Scottish referendum. Had the print version ready Saturday night — ahead of us going to the Highland Games, in Loon, on Sunday. Given that this is the 10th book I have published through CreateSpace I have learned that it just does not pay to submit your book for THEIR ‘Print Review’ over a weekend! Yes, they work 24 x 7 BUT invariably they have their “C-team” working over the weekends — and I also suspect that they get a lot of books submitted for review over weekends. I have found that the best time for getting a “CLEAN” print-review is Monday nights. So I submitted the book Monday afternoon. Yesterday, Tuesday morning, I had the Green Light. And bingo.

It was on Amazon within an hour of me approving the digital proof. That is quick. Then late last night I send a quick “please/thank you” note to Kindle asking them to link the titles — because I don’t have the patience to wait for the 72-hours or so it takes for this to happen if it is done automatically. Kindle is good to me. They linked it … by this morning … and send me a ‘smile’ e-mail saying ‘done’.

So that is where we are. The Kindle book has already sold a few copies. That is nice. I am happy. Now for the next book — though I am TRYING to FORCE myself into giving myself a couple of days break before starting. It is hard. I have to write. It is an addiction.