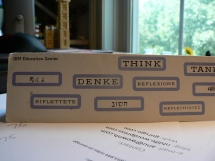 I do not have the time, desire or energy to justify it, yet again, right now but take it from me, on trust, that I do know IBM and its workings better than most. IBM was my life, 24×7, for 33 years and when I say 24/7 I am not joking.

Watson has been on my mind, quite a bit, of late. Just this morning that I really should write a book on the Watson technology. I haven’t looked BUT I am sure I have a fair amount of the material already.

It is like Microsoft and the X-Box. Ebay and Paypal. Just today I heard that Symantec is going to be splitting into two.

I don’t have the time to go into details BUT to me it would make sense, especially in terms of the IBM shareholders, IF IBM splits off Watson as a separate entity. By all means IBM should hold onto a large chunk of the equity, BUT IBM should cut it loose.

I haven’t fully thought it out BUT it occurs to me that MIT or equivalent might make a better fist of Watson that will IBM — at least in the mid-term.

Wow. I already like the sound of that. I want in.

Just remember where YOU read this first.

Storms over NH Oct. 8 as I predicted. Click for WMUR …

I will keep you posted and will post charts etc.
closer to the time.

This is not right.

Pope John XXIII (#262) receiving the Balzan Prize for Peace, Humanity and Fraternity, an Italian variant of the Nobel, on May 10, 1963, from the President of Italy, at the Vatican, 3-weeks ahead of his demise on June 3, 1963. Click to ENLARGE. This will make you smile.

There are 4 very good and clear reasons as to why populist (but ineffective) Pope Francis (#267) should NOT get the Nobel Peace Prize for 2014.

1. His efforts, initially centered around prayer, for peace in the Middle East & Syria/Iraq have NOT worked, in the slightest.

2. In mid-August, i.e., just 6 weeks ago, Francis, one way or another, backed MILITARY ACTION against ISIS when he realized that his prayers were useless.

3. There are still some serious, unanswered questions about his actions during the Argentinian ‘Dirty War’, in the 1970s, when he was the Head Jesuit in Argentina.

4. No previous pope has been a recipient, and IF St. John XXIII (#262) did NOT get the Peace Prize (and he was who helped JFK in defusing the Cuban Missile Crisis), this pope, who so far as done diddly other than grandstand does NOT deserve it.

To be fair, even St. John Paul II (#265), who did so much (and secretly spent BILLIONS) to bring down communism, first in his native Poland and then in the USSR, had a better claim. Francis has done NOTHING tangible. Just sound bites for the media.

At least Barack Obama, when he got it, was trying to be an anti-war President (though that has since changed).

That Al Gore was the 2007 recipient was a joke — many such faux pas committed by this Norwegian cabal.

I don’t think the (then) Dalai Lama deserved it. Like this pope he is but all talk — and no trousers (in his case, quite literally).

There have been years when the Nobel Peace Prize was
NOT AWARDED — even as recently as 1972.

There should also be NO Nobel Peace Prize in 2014.

That would be fair — with so many wars and unrest in progress.