This was sent to me, by a Sri Lankan with British connections, as yet another example of ‘the yanks will never understand’ British humor.

It is very, very good. You must watch. It will make your day.

Video quality isn’t very good. I looked around for a better ‘copy’ but couldn’t find it — BUT trying clicking the “HD” (High Definition) option on the bottom because it did make it much better on my screen.

Ahh! The joys and privilege of being British.

∧∧∧∧ Also Category ‘Health Care’ that should bring up ALL ‘Obamacare’ posts >>>>

Well they have given ‘it’ a slightly new look ahead of the November 15, 2014 opening of the enrollment period for 2014.

I am NOT looking forward to that. I think it will still prove to be a nightmare.

In theory, as it says on the new homepage, I should be able to keep what I have since I got a plan, eventually, through healthcare.gov for 2014. But, I am skeptical. They will manage to screw it up.

First thing I want to know … who is the NEW chick?

Interesting change in ‘demographics’. One year ‘white’, next year … She looks like she might be related to Michelle Obama. Is that possible. Did they pay millions to an Obama relative to use their image on the Website?

Good news and I was AMAZED. My existing logon (as of May 2014 — when I had to change it AGAIN) worked! I couldn’t believe it.

But I still saw, given that I am quick … the same old ‘flashing screen’ that said “authenticating … wait …”. So the underlying logon process seems to still be the same. Yes, it is possible that the backend has been changed.

Can’t really do anything. You are locked out till November 15 — and I would not be surprised if they make us change passwords at that time.

I know that it will not be a walk in the park. Yikes. 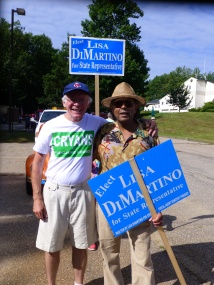 Two of my favorite people.

Seeing this picture, which I was not expecting, made my day.

Good for them both. Very nice guys. I am pleased. Of course we are supporting them. Salt of the Earth.

There is a blurb about my astronomy presentation at the Alton Gilman Library in this issue too, but that can wait. Richard Leonard and Mike Cryans, especially together, is much more important. (And it did wait.)

∧∧∧∧ Also Category ‘Health Care’ that should bring up ALL ‘Obamacare’ posts >>>>

Well the way I see it “Texas Health Presbyterian” in Dallas (TX) might as well declare bankruptcy TODAY.

Never mind the allegations that Eric Duncan did NOT get adequate and proper treatment. That is somewhat subjective and there will be shades of gray.

But there is NO getting around the fact that they misdiagnosed him, on his first visit, and sent him home with antibiotics! That was a crime. For a start, even my 8 year old knows that antibiotics don’t work against viral infections — just bacterial.

So that action has HUGE ramification.

IF Eric Duncan had been admitted on that visit so many things would be so different.

IF we get people who came into contact with Duncan, after he was released, contracting Ebola things will get ugly.

Have you noticed there appears to have been NO repercussions at the hospital.

Who is the doctor or doctors. I want names. They should be fired and their licenses revoked.

The CEO of the hospital, who probably gets paid millions, should resign.

But, given that I do rub shoulders with ‘them’, I can already feel the intense heat being generated as all these lawyers rub their hands in GLEE. They, quite rightly, are seeing BIG, BIG millions.

Texas Health Presbyterian is screwed. They might as well start packing up today.

This was so bad. So bad.

I am NOT even going to think about how much all of this is costing all of us taxpayers.

Further to my detailed post yesterday and this CNN ‘justification’ I could just say quod erat demonstrandum (QED). Case proved!

Based on what CNN says, and they obviously scraped the barrel trying to come up with positives, what has he done to PROMOTE PEACE?

Plus the CNN statement about his compassion for the ‘disenfranchised’ cracked me up.

What about all of the Catholic clergy sex crime victims?

CNN, without realizing it, hit the nail on the head as to what this pope is all about. “Rock Star“. Don’t give him the Nobel give him the Oscar for the BEST SUPPORTING ACTOR — given that that is what he is. A poor supporting act for God.

This pope is all talk. No action and I suspect no trousers.

He is supposed to be God’s representative on Earth. Vicar of Christ. And he can’t stop the unrest in the Middle East. Come on.

Snowdon has a better claim to the Prize.

Oh, don’t get me wrong. I like the bloke. I even had him, in print, as a papabile. I think I was the ONLY one.

There should also be NO Nobel Peace Prize
in 2014.

That would be fair — with so many wars and unrest in progress.