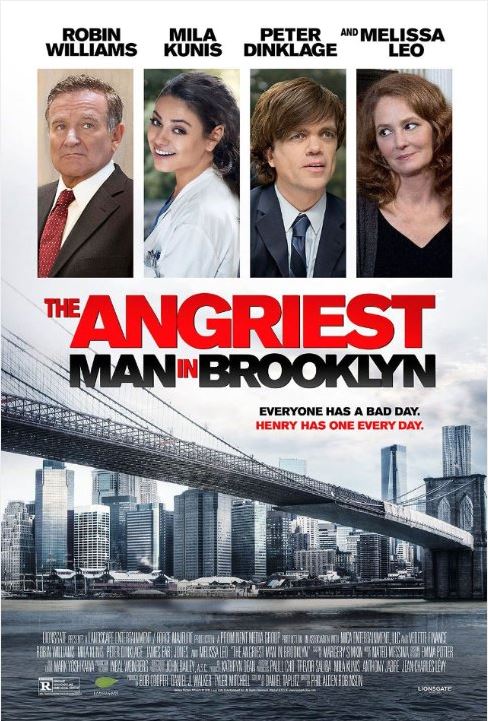 We watched this 2014 movie, across Friday and Saturday night, via our Amazon Prime Movie subscription using the (ever impressive) Roku 3.

It is funny. It is good — albeit with a few scenes that stretch one’s credulity. Someone not familiar with New York watching this movie would get the impression that NYC had no police presence and that all New Yorkers were glued to their cell phones. There are two people nearly drowning in the East River and NOT a single person notices it and comes to their aid? Really? Robin Williams can walk across a beam, over car traffic, on the Brooklyn Bridge and stand on the other side, talking for 5 minutes, and there are NO cameras on the bridge that spots him? Really. Then an amusing slip up in continuity. He supposedly buys a fully charged Samsung video camera but when they show the camera being used it is a Panasonic! But these aside it was a good ol’ mindless romp.

Deanna was convinced that this had to have been Robin Williams’ last movie. I was slightly more skeptical for one and just one good reason. I was sure that if it had been OTHERS rather than the two of us would have commented on the sad irony. Lets face it, Robin Williams tries to commit suicide in the movie! So if this was his last it would have been bad.

Well it wasn’t. I am glad about that. Plus, if it was indeed his last I expected to have seen something at the very end saying something like “In memory of Robin Williams”. I watched the entire credits … and didn’t see anything.

It sure isn’t Chuck E. Cheese’s, Friendly’s, McDonald’s or even Krazy Kids. That is for sure.

Yes, I am into ‘different horses for different courses’ and I know that there are some kids and parents who love reptiles. But, I am not sure that that is reason enough to hold a birthday party for 8 year olds at a Reptile Place. I love (v. hot) curry BUT I would never dream of serving curry, as the main course, at the kid’s birthday.

Well on Saturday, Devanee & I took Teischan (8) for a birthday party at the New England Reptile Distributors, in Plaistow, N.H. I was NOT impressed. Actually I was very turned off. No, don’t get me wrong, I am NOT against pet stores. I like PetCo. I even go in there for fun. But, this was not PetCo. This place was disturbing and I was NOT ALONE. That I am not partial to snakes and have been known to kill them is no secret. But, where I grew up in, snakes killed people daily — and we are talking quite a few each day. Cobras and pythons weren’t things you saw behind glass. You encountered them, to your horror, in your yard! So I do have an excuse. You don’t find too many Sri Lankans who are crazy about snakes.

Unlike the other adults we didn’t stay. The place smelled and many in the staff appeared to be under the impression that it was Halloween as opposed to Pi Day. From what I could see the staff never went to the Chuck E. Cheese’s training on being a good host. Lot of stuff that did not sit well with me: a large turtle in a tank in which it could hardly turn and the feeding dead mice to Piranhas. We went somewhere genteel where they had decent food: Dunkin Donuts. We sat and read books for awhile before going out in the rain to look at old European cars.

But what was interesting and germane was that Devanee & I were not alone when it came to our aversion to the place and it been chosen as a venue for a birthday party. I spoke to 3 Mums who were not thrilled about coming there, one said “I don’t think I will be able to eat for 3 days” while a second said “I will have nightmares about this place”. I have heard Mums complain that they ate too much at Chuck E. Cheese’s but I am sure I have never heard one mention that they will have nightmares about the place. And then the most important and germane of feedbacks. One Mum said that her son always says when he goes to a ‘venue’ for a birthday party that he would like to have a birthday party at that same place. Not so at this place! She thought that that was telling. I asked Teischan. Though she said she liked it she didn’t want to go back! Enough said.

So, I guess I can scratch that place from the list of possible birthday party venues.

Yes, it had been raining for about 7 hours, but the rain was not heavy, it was not freezing and there was hardly any wind. So I was not expecting a power outage. Around 8:20 pm (just as I was getting ready to put this PC to sleep) and go down for dinner, the lights went off — but came back at once. The PC is on (good) UPS and just kept on going. Then it did it again. I knew things are getting dicey. Then it went out for the 3rd time, around 8:24 pm and stayed down. I just powered off, turned off the UPS and went down.

Devanee already had two flashlights and I had another, rechargable with built in night-light, in my office. I did NOT even think about rolling out the two generators in the rain. Worst case, I was going to have some dinner (which was simmering on the gas cooker), read by flashlight and get an early night. But the lights came back within 10 minutes. So that was good.

We had a blip Thursday morning too — enough to disrupt all the clocks and get the DirecTV Genie DVR to reboot. But that wasn’t bad.

As far as I can tell this was the first real electric outage, in this neck of Alton, NH, since the 26 hour outage over Thanksgiving 2014. So we were due.