Of course, if it was NOT technology, this would, indeed, not in any way be incongruous.

What to I, is crazy, is that these are books on technology — fast-changing, Web-technology at that. While the fundamentals might just about still be in place, much would have changed in the last decade. But, people keep on buying my 5 technology books — albeit NOT in any large numbers.

While I do find it amusing it is also gratifying — not the money BUT the fact that people still put some stock into what I wrote that long ago — on technology. Yes, I do know that I did my best to make technology understandable. That was why I was able to do this for 35-years.

Now, I should pre-order a Garmin Vivoactive 3 … {Smile}

The ‘Snipping Tool’ that came with Windows 7 was by far my most treasured and used feature of Windows 7.

I use it multiple times a day. I could NOT function without.

But, it has severe limitations. Other than snipping per se, it has very few tools. So, I invariably end up using PowerPoint in conjunction with it to get the highlighting and annotations I desire.

Then I heard about ‘FastStone’ through the DPReview forums. They were actually endorsing FastStone’s ‘Image Viewer’, a freeware image editor. It sounded quite intriguing. When I visited ‘FastStone’, a freeware developer, I saw ‘Capture 8.6‘. That appealed to me much more than the image editor — given that I do very little of that, and TONS of screen captures on a daily basis.

A few days ago I downloaded ‘Capture 8.6’ on the 3–day trial basis.

It has everything I want. You have already seen its results over the last few days. My screen captures now have a professional look.

I will definitely buy it. There is NO QUESTION about that.

It is BRILLIANT. I LOVE IT. Did I already say that. It deserves to be said again.

If you use ‘Snipper’ try this out. It is like chalk and cheese.

This was 4-days later. Vasco Núñez de Balboa conquering and taking possession of the Pacific!

There is a MISCONCEPTION as to this September 25th anniversary when it comes to the Pacific.

Of course, first and foremost, it all has to do with first European eyes. Native Americans and Asians and the Polynesians were very familiar with the Pacific going back thousands of years.

Even with that Spaniard, Vasco Núñez de Balboa was NOT the first European to see the Pacific — on September 25, 1513! He was the first to see the EASTERN side of the Pacific.

Two Portuguese explorers had ventured into the Western part of the Pacific in 1512. That part gets ‘lost in the translation’ because it does not involve the Americas.

Kind of funny, all round.

Alton’s ‘Prospect Mountain High School‘, ‘Bob 319‘ robotics team representatives visiting the Alton Rotary Club for a presentation. They are holding up some of the awards they have won of late.

Yes, that is Devanee right in the middle in glasses. 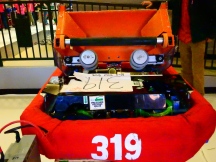 Just two days, after watching the highlights of the Indians winning the 2nd ODI against Australia, I said that ‘they’, i.e., the Indians, looked invincible.

Then, a couple of hours ago, I watched the 3rd ODI. I thought Aaron Finch’s return, and his magnificent 124, had turned the corner for Steve Smith and Australia. Yes, the middle order dissapointed, but 293 wasn’t too bad of a total.

India just cruised to victory. Yes, there was a few tense moments BUT Dhoni hardly had to face a ball. Hardik Pandya is one heck of a cricketer. He is exciting to watch, batting, bowling or fielding. Can you imagine what his nickname will be in dressing rooms in Australia, England and New Zealand. As far as nicknames go it would not be one that is HARD to take!

What a bloody team. I am in AWE. Indians must be SO happy.

Related posts:
++++ Check Category ‘cricket‘ on sidebar for lots of other posts >>>>

It was one of the new shows available on ‘Acorn TV‘ (i.e., British shows) on the Roku. I was attracted to it just by its title — since it immediately brought to mind ‘The Best Exotic Marigold Hotel’. Well it is NOWHERE close to being that funny — BUT to be fair, it is not meant to be. It is more of a (somewhat obvious, predictable and stereotyped) romance-drama. It is OK. Teischan finds it ‘acceptable’ and I found it HOPING that she would like it. “Mrs. Hughes” from ‘Downton Abbey‘ made and appearance and that was a bonus.

Right from the start the scenery, especially the BEACHES, reminded me of Ceylon — Sri Lanka — especially those around Galle that I was extremely conversant with during my 14-years there. But, having also been to India, multiple times, I knew that the southwest coast of Southern India was similar. The catamaran boats shown also reminded me of Sri Lanka ….

Then I checked IMDb.com. It was indeed shot in Sri Lanka! Wow. Now I will have to tell Teischan.