For many, including I, the ‘Health Tracking‘ is the primary rationale for getting a smartwatch like this.

As she says, the good news is that this is all software-related and Samsung will be able to fix it with new versions of the firmware.

Glad I did not rush off and get one as I had originally thought of doing.

I am now waiting to check out the Garmin MARQ Explorer.

Click to ENLARGE. It will be a NEWER version of this APP.

I started doing some serious research into this Samsung Galaxy Active smartwatch ‘Blood Pressure‘ capability and soon discovered that it is far from satisfactory.

Basically it will be the same as that currently available with the Samsung S9(+) smartphones and this capability, on the phone, has not been a great hit.

There are 3 BIG negatives:

So, I am thinking of holding back on buying a Samsung Galaxy Active.

The BP feature is only going to be available as of March 15, 2019. I am going to see what the reviews are. OK?

I suggest you do the same.

Heart rate monitoring is good. A must have and I am not sure I could now live without it.

ECG/EKG is cute, but it doesn’t seem to do much for I since I, to my amazement, appear to have a normal rhythm.

Now I did own a Samsung Frontier S3 but I didn’t use it much. Ended up selling it — for a decent price. But, the Galaxy Active might be different. Having blood pressure, on my wrist, 24×7, is hard to bypass.

Galaxy Active will NOT be available till March 8, 2019. There are NO reviews of the blood pressure feature as yet. I would like to see a couple of reviews. But, for that price I might just pre-order and if it does not work — return it.

Click to ENLARGE and read here. Use link above for original.

At last a media article that gives Garmin, and the Fenix 5 (Plus), just dues. I was getting so fed up of seeing articles/post that gave Garmin short shrift or no mention at all. It was always Fitbit, Apple and Samsung. And in reality none of these can hold a candle to the venerable Garmin Fenix 5 (Plus) — and yes, I do own, and wear, ’24×7′, a Garmin Fenix 5 Plus. Even the new Polar Vantage V falls short in most instances.

This article in Forbes is pretty much on the mark. The Fitbit ‘Versa’ is a joke next to a Garmin.

The Apple 4 and Withings are indeed interesting watches but they are more smartwatches than competent activity trackers.

I have not tried a Garmin Instinct but it too looks interesting. But, to be fair I would have put a Garmin ‘Forerunner 645‘ or ‘935‘ in its place.

But, check out the article. I thought it was fair.

Happy New Year — with YOUR Garmin.

It aggravates me such when Garmin, unfairly, gets such short shrift. Much of it has to do with Garmin’s appalling marketing. Fitbit just runs circles around them. They are so inept. These articles are crazy. It is always Fitbit, Fitbit, Samsung, Fitbit. What about Garmin.

Garmin has at least three watches better than the Fitbit Versa. But, Oh, NO! Never Garmin.

Last year their Website went down and folks relied on me to provide the schedule. No problemo. That is why I am here. I doubt whether they will have server troubles this year. They learn fast.

But, I have already seen that many of you are coming here looking for the schedule. You know I only live to please. So, here is the schedule.

Yes, we will be there. See you there. I am easy enough to spot. The ONLY brown guy there.

Related Posts:
Search ‘Sandwich’ for many other related posts from multiple years.

Amazon listing from a few minutes ago.

It appears that this is a SCAM.

Too good to be true. Well glad I didn’t order one (though I was going to do so via PayPal (given their ‘guarantee’)).

You might have seen these Ads too — on Facebook and Instagram. When I first saw it I was immediately struck by its resemblance to the Samsung S3 — given that I owned one for nearly 6-months. I did some research. It has to be a S3 — either deeply discounted by Samsung or being copies.

That the Samsung S3 is still being sold at Amazon for $298 is ALSO CRAZY. It was ~$240 last Christmas when I bought mine. Yes, I had seen the price creep up, BUT now we know that the S4 is due soon.

I can’t find anybody who has bought a Radiance S3. I am tempted to order one. For $50 how can you go wrong? Will make a great Christmas or birthday present. 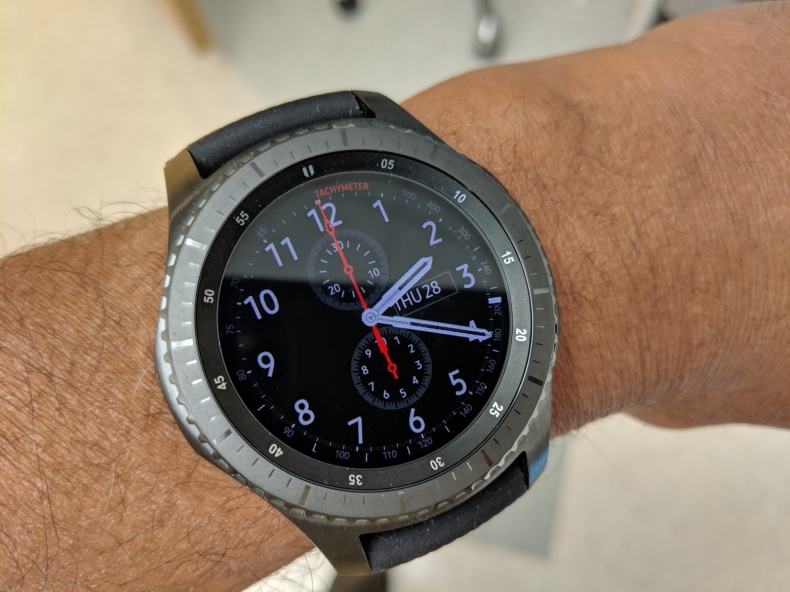 The Samsung S3 on MY wrist.

Click image to access original article in the U.K. “Express”. Google “Samsung Gear S4” for many, many more over the last 72-hours.

From the same “Express” article referenced above. Use the link — above.

YouTube video claiming to confirm that the S4 will have
“Blood Pressure Monitoring” (BPM).

The Samsung Gear S3 was a pretty impressive and compelling SMART watch — and I know since I had one till last week (when I sold it on Facebook).

It lacked all of the activity, sleep, performance and stress tracking features to make it into a genuine alternative to a medium- to high-end Garmin. But, it was a decent Smartwatch for those that wanted just the basic activity tracking functionality.

In the last few days there has been a lot of talk in the media about the forthcoming Samsung Gear S4 — which might possibly be called the Samsung Galaxy Watch.

It is supposed to have a lot more activity and sleep features. But, it is also said to go all out on health monitoring, and might include “Blood Pressure Monitoring” (BPM). That would be big.

Some are talking some real fancy features like displays on the rim of the case and on the strap. That might be overkill. But, BPM will be a game changer.

First time ever I sold anything on Facebook. I wanted to see what it was like. Was not too, too bad. Have the advantage that you can check the respondents profile on Facebook.

Yes, as with Craigslist it started with 4 – 5 ‘crazies’. I could tell that they were ‘scammers’ because they had patently bogus names. I blew them off.

Then I got a message from ‘Steve’ who started off by asking whether I would accept PayPal. That got my antenna up. I will confess I gave him quite a grilling. Then he told me he was a Realtor from Rhode Island. I found him on the Web and called him. He didn’t know I was going to call. He answered. Turned out to be a nice guy. Yes, I am shipping it to him and he graciously paid for the shipping.

I got the Frontier S3 to be my dress watch and act as a backup if my main tracker failed — as had done my first Garmin Vivoactive 3. But, I had not worn it much. Wore it mainly between my second Vivoactive 3 and the Fitbit Ionic and while waiting for my Garmin Fenix 5. In total I must have worn it for less than 5-days.

10-days prior to Christmas 2017, Best Buy DROPPED the price of the S3 by $40. It was, as such, cheaper then than it is now. So, I am quite cool with the price. Of course I have to eat some depreciation, but I am ‘OK’ with that. I wasn’t going to be greedy and try to compete with the 20 or so folks trying to sell S3s for $200 — and have been doing so for weeks. I got full price. {Smile}

Once I got the Fenix 5 I knew that my chances of ever wearing the S3 was close to nil. They are very similar watches, both in size and appearance. Side-by-side they look identical. So, I knew that I should get rid of the S3 and use the money to get a used Garmin. That is what I am going to do.

Yes, there are some Hublot’s that I do kind of like — though in general they are too bulky for my taste, and dainty wrist.

But, this watch is UGLY. Real ugly. Even uglier than my Fitbit Ionic and that is really saying something.

I guess I will never see one of these. Way too expensive to be seen in New Hampshire. So, that at least is a consolation.

My Samsung S3 Frontier on my wrist.