So, after my post of yesterday, as to how bad I am feeling about the damage to the Californian wine industry, I decided today to go out and start buying MORE Californian wine to show my support and solidarity. It is a small gesture, BUT it is from the heart. I want to do my part. I urge you to join me in this.

That much of this year’s crop has been gathered is a huge relief. But, we know that the region and wineries are devastated. I just worry that we are going to see a flood of bitter, hard-to-drink South American wine pouring into the country. Resist. Stand with California.

This was the WORST meal I have had in a sitdown restaurant — EVER!

I used to be a big fan of ‘Ruby Tuesday’ — but then we just stopped going, mainly because it is the kids that call ‘the shots’.

Of late it has been “Friendly’s“, “Friendly’s”, “Friendly’s” … because Teischan loves that place — and we are going there (AGAIN), this Wednesday, for her birthday.

I was hoping for great things. Nice enough inside. Ambience is good. Tasteful decor.

I ordered the ‘Philly Cheesesteak Potstickers‘ and the ‘Thai Phoon Shrimp‘ — the later as an entree along with the Salad Bar.

What I was served was DIABOLICAL.

I have never tasted anything so salty and bitter in MY LIFE. It was horrible. Yuk!

I spoke to the waitress about it afterwards.

She admitted, freely, that others too had complained about its saltiness and bitterness. She even went onto volunteer that she suspects that it will be coming off the menu soon.

DO NOT ORDER THESE POTSTICKERS.

The Thai Shrimp were tasteless BUT that could have been because my taste buds had been raped by the damn potstickers.

The salad bar was OK, though nothing special.

Found out that NOBODY, but nobody counts to see if there are 55 items — and forget the PLUS.

Rather go to “Friendly’s”.

I suspect that this is another chain going down the drain. 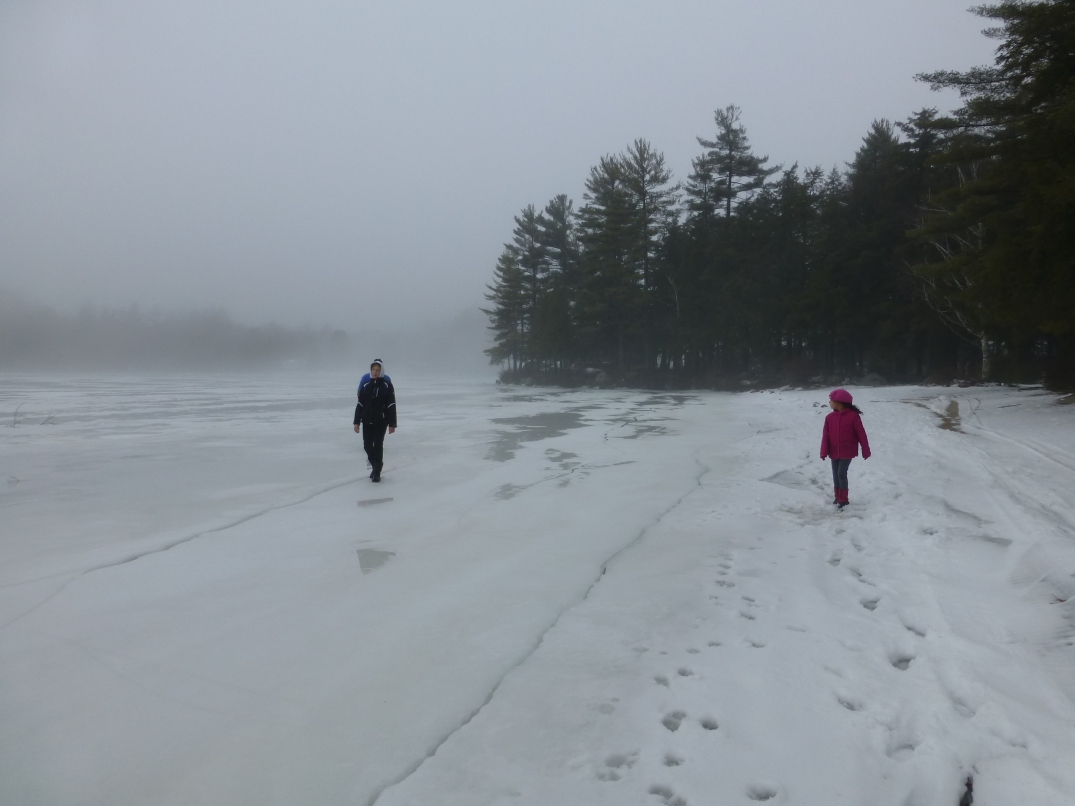 The fog from the melting snow had been a constant feature the last few days — making it damp and gloomy. Today, Monday, was a different story. Beautiful day. This was at Halfmoon Lake, Alton, NH on Sunday. Click to ENLARGE.

Deanna’s picture of the snow and ice on the beach melting exposing what is underneath. This was at Halfmoon Lake, Alton, NH on Sunday. Click to ENLARGE.

Having lived in New Hampshire for 26 years, I had got used to banking on the January thaw. It was always a welcome respite and cleared away some of the piles of snow.

If I am not mistaken we missed a couple of January thaws over the last 3 years or so. So this years thaw was doubly welcome, especially after the bitter cold days we had at the start of the year. It was supposedly above freezing since Wednesday or Thursday of last week. During the first two days of this, per the multiple thermometers we have, digital and analog, around the property, as is common in NH, the temperature hovered around the magical mark. On Friday it definitely ticked up. We had major melting over the weekend. The fog was something else. It was dark at mid-day on Sunday.

Today was a joy. A beauty. When I got ready to run up Prospect Mountain Road, as is my wont 5 to 6 days a week, the very accurate digital thermometer in the kitchen, with an external remote sensor, was saying it was 40°F. To me, in the NH winter, that is a veritable heat wave. Decided to forgo the second hand, ultra-padded women’s ski jacket I wear when I go running. Running in ratty, tattered clothes is one of my trademarks. So instead of the ladies ski jacket, I put on an old fleece sweat shirt on top of my even older sweat shirt, a T-shirt underneath. So two sweats were plenty warm enough to go up and down Prospect for about 45 minutes. Beautiful day. Much of the snow on the exposed flanks of Prospect are gone. The water was gushing in the ditches. Maya got soaked. We had fun.

The only thing about a good January thaw is that it invariably presages a bitter cold February, my least favorite month of the year — even if Chinese New Year falls during the month.