SWAN denotes that it was found by the Solar Wind ANisotropies (SWAN) instrument of the SOHO spacecraft studying the Sun.

It could become naked-eye visible in a few weeks. I will keep YOU posted. Promise.

But, I did say, very clearly — DO NOT GET YOUR HOPES UP.

I was hoping. I would have liked to have seen another naked-eye comet. The last was 23-years ago! That is too long.

There is a WHOLE generation, in the Northern Hemisphere, that have never seen a naked-eye comet. (Yes, there have been a FEW in the Southern Hemisphere.)

That it started breaking up this far from the Sun is incongruous. But, it is travelling at breakneck speeds, getting faster by the second.

Well, that was THAT. SMILE.

Waited 7-years for this.

This comet looks promising BUT when it comes to comet so many let you down badly. Remember, remember my great comet, C/2012 S1 (ISON). See one of my diagrams below.

We have had a couple more since that failed to deliver on their promise.

In a month’s time it will be getting close to us as the top diagram shows.

I will keep you posted. Promise.

If you are interested in comets check my COMET book (below) and here.

Comet ISON IF it had rounded the Sun — rather than getting FRIED by it, because it went so close.

It is expected to be just naked eye visible. Will definitely be able to see it with binoculars — and, of course, a telescope, even a small one. It will be a green fuzzy ball. There will be NO TAIL per se. So, don’t be looking for the tail. Just a fuzzy, glowing green ball. The green ball should be fairly big — bigger than a star.

For us in New England, the easiest bearing is going to be the easy to locate ‘winter cluster’ — Pleiades (the seven sisters). See the chart above.

C/2018 V1 is much more of a CLASSIC comet than our current ‘Christmas Comet of 2018‘, i.e., 46P/Wirtanen. That is why it has a ‘C/’ designation while the other is a ‘P/’. The ‘P/’ denotes that 46P/Wirtanen is a PERIODIC comet — one that swings around the sun on a regular basis (like a commuter). The ‘C/’, on the other hand, means that is a NON-PERIODIC. It means that this comet has not been previously seen in the last 200-years. Typically it means that it is a FIRST TIME visitor from far, far out in the Solar System, ideally from the Oort Cloud, the incubator of most comets at the very edge of our Solar System.

So, we are assuming it is a FRESH comet, with a lot of frozen matter that will sublimate as the comet gets closer and closer to the Sun. That is what makes it visible, gives it a tail and with luck makes it spectacular. Right now it is touch and go. Viewed through a powerful telescope you can already see a blue tail — that color indicating the presence of ionized Carbon Monoxide (CO+).

On Tuesday, November 27, 2018 it will be at its closest to Earth — 62 million miles. Comet ISON (C/2012 S1) that could have been the GREAT COMET of 2013 would have been 40 million miles. So, C/2018 V1 will be 22 million miles further out. BUT, unlike ISON it will make it around the Sun. That is a given. It is NOT a sungrazer. Actually it doesn’t get very close to the Sun! As you can see from the above diagram it does not even cross Mercury’s orbit.

Right now it is BORDERLINE — but shows more promise than 46P.

I will keep you posted. This was a BIG heads up.

Comet ISON IF it had rounded the Sun — rather than getting FRIED by it, because it went so close.

I have been keeping an eye on it as promised.

Touch-and-go right now. Teetering right on the edge of naked eye visibility — and even that means you are not going to be able to see it unless you have no ambient light. So forget seeing it from a city.

Alas. I am bummed for ALL of us.

But, I will keep on checking and let you know. OK?

Keep fingers, toes, and MOST OF ALL your eyes, crossed. That helps.

It will NOT be spectacular, and it is definitely not a great comet, BUT, it is expected to be naked eye visible and it will be — WITHOUT FAIL — appear the week before Christmas 2018. It is Periodic Comet with a 5.4 year orbital period. So, it is a well known comet and one that is not going to fizzle away as did MY comet ISON in 2013.

This is just the initial heads-up. I just found out about it today. I will keep you posted. Promise.

Exciting. We haven’t had a decent naked eye visible comet in DECADES!

It will NOT be spectacular, and it is definitely not a great comet, BUT, if it is naked eye visible, it, with its green tinge (due to its chemical composition), should be quite the sight up there. We have not see a decent comet since the mid-1980s. Comet ISON, on which I expended considerable time and energy, vaporized when it got too close to the Sun.

No such danger with 21P/Giacobini–Zinner. This is not a sungrazer.

The ‘P’ in the 21P denotes that it is a periodic comet; i.e., a comet that has made at least 2 well observed orbits around the Sun. Actually 21P orbits the Sun every 6 years. It is very periodic. It doesn’t go too far away. Just beyond the orbit of Jupiter. It is well known and well studied comet that was discovered in 1900.

I will keep you posted. I was excited to hear that it might be naked eye visible. Wow.

Definitely extremely interesting and intriguing. Wow. Orbital eccentricity of 1.1922! The greatest we have ever seen — the keywords here being ‘ever seen’. Comet ISON, that crashed and burned on Thanksgiving Day 2013 had an eccentricity of 1.0000015.

But, here is the deal with eccentricity. Anything over 1.0 means that the object will eventually leave our Solar System. That we know. But, what we cannot tell as yet is WHEN A/2017 U1 got that highly eccentric orbit. We just do NOT know — as yet. And maybe never will.

To claim that it must have originated OUTSIDE of our Solar System — is speculative. We do NOT have enough evidence.

NASA/JPL’s official statement confirms that: “So far, everything indicates this is likely an interstellar object, but more data would help to confirm it.” Note the ‘likely‘ and the part about ‘more data … for confirmation‘. That is exactly MY POINT and what I am trying to impress.

The claim that its orbit was NOT influenced by a close encounter with a planet — typically one of the BIG ones — is speculative. It could have been majorly torqued around by Uranus or Neptune. We don’t know.

I have a druthers that this is a very old comet — a periodic one at that, which on its last trip out, maybe 400 years ago got too close to a gas giant and had its orbit turned ‘upside down’.

All I am stressing is do NOT jump to conclusions.

We know so little about what has happened in OUR Solar System and what is happening right now.

But, it is exciting.

Has a ton of good information about comets.

All these pictures (bar the first two) were taken by Devanee Guruge. 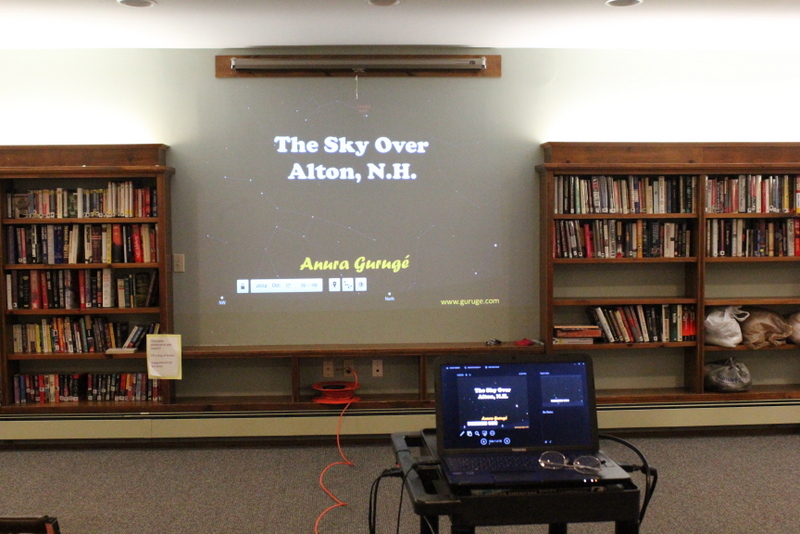 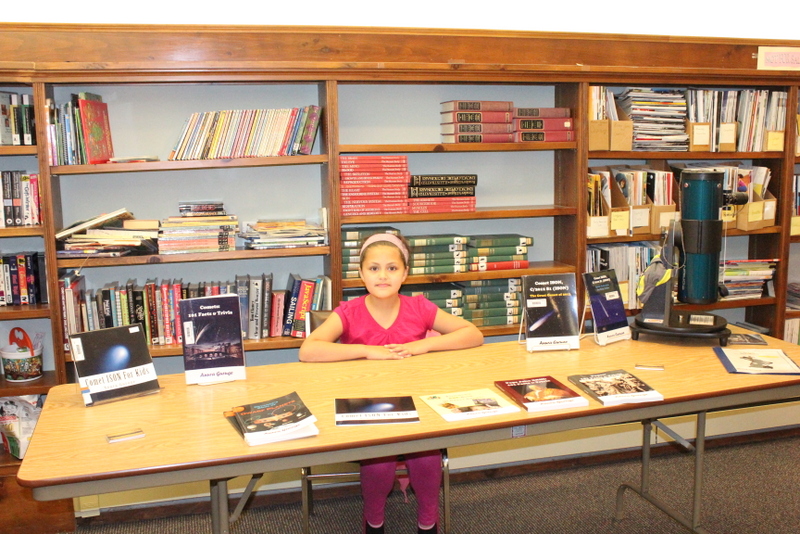 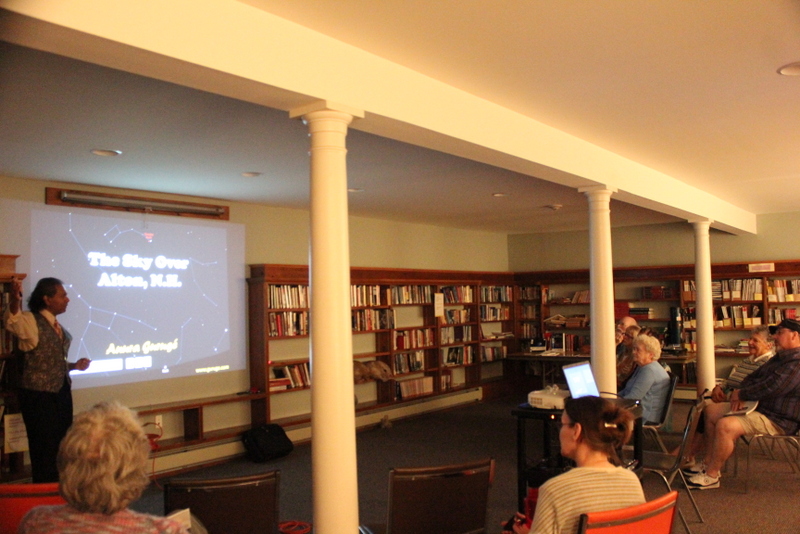 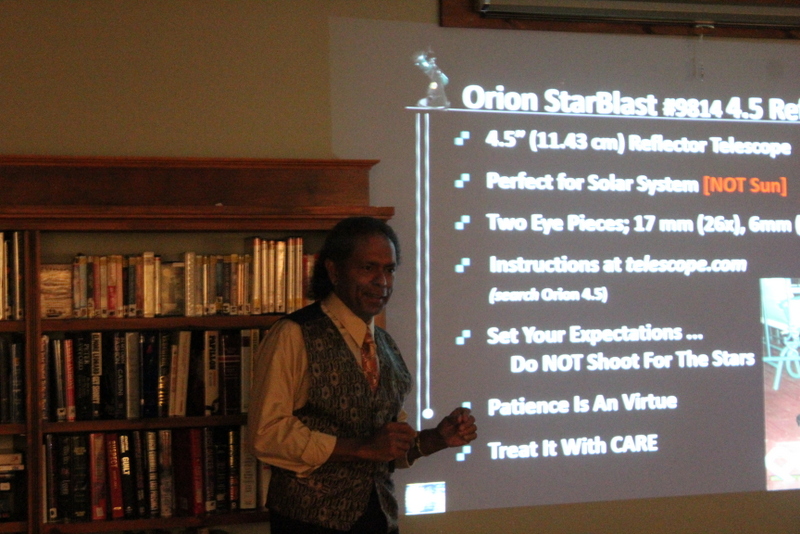 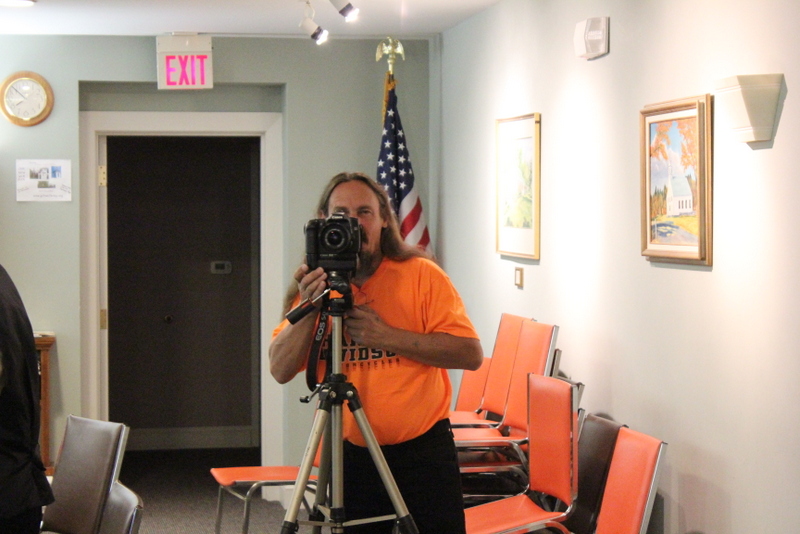 Alton photographer, John Bishop, a friend, who arrived and joined Devanee in taking pictures. So I had two tripods with cameras at the back.

It wasn’t packed but the folks that were there were very receptive and engaged. I had planned for about 90 minutes but we were still there, having a lot of fun, 2 hours later. They seemed to really like it — or at least that is what they claimed.

I had fun. But, I have never done a presentation where I have not had fun.

Our friend, Alton photographer, John Bishop, turned up — unexpectedly given that we thought we was going to be in Manchester visiting a friend that was in hospital. John set up his, professional grade Canon, and started taking pictures in tandem with Devanee — who relished the opportunity to use my Canon. I should get John’s pictures on Sunday.

Part II of this astronomy presentation is on Friday, November 20, 2014. You can come to that even if you didn’t come to last night. They are self-contained, though I will not go over the same material.

So that was that. I am glad that I did it.

Holly Brown, the librarian, always extremely nice, had displayed my astronomy books on a table etc. She was very happy, and that was good.