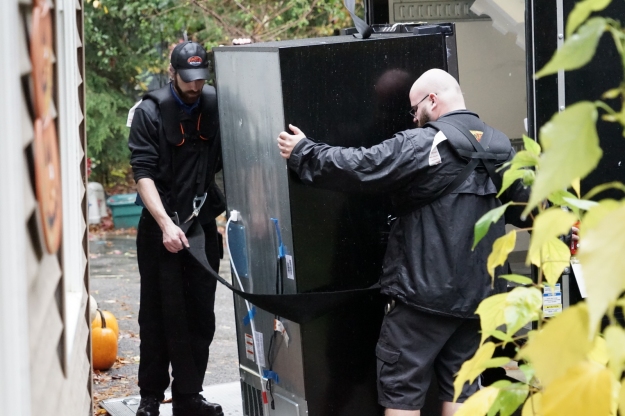 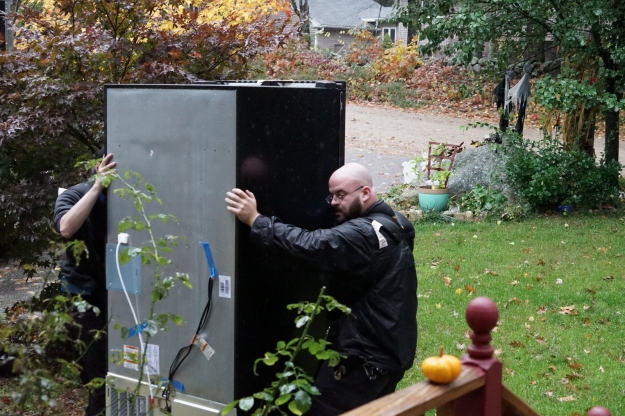 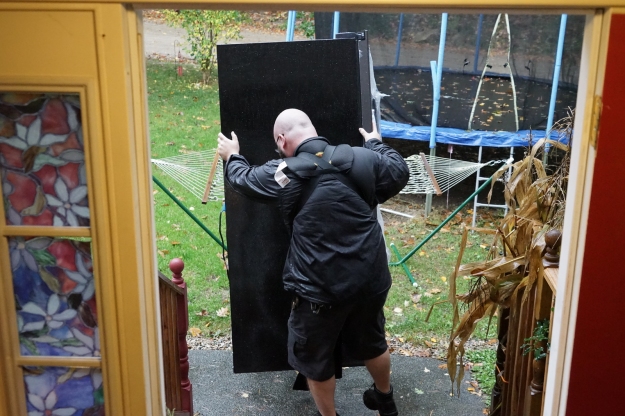 I had never seen this been done, or even heard about it, until we had our accursed Samsung 25.4 cu. ft. fridge/freezer delivered in April 2017. Click here for those pictures.

I was in awe. That Samsung was 289 pounds (131 kilos). Two people — with no real training. I am surprised it meets U.S. Occupational Safety and Health Act standards. But, it is Best Buy and you would assume that know what they are doing.

Well, got to see it again today, when we had the damn Samsung replaced with a (much more expensive) Whirlpool.

Not easy to get good pictures BECAUSE you do NOT want to get in their way or impede them in any way. 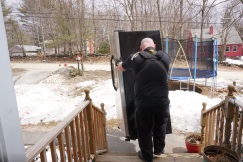 Best Buy ‘Geek Squad’ FINALLY
taking the bloody piece of junk away — in the pouring rain.

It stopped making ice towards the end of July 2017 — 4-months after we bought it, new, from Best Buy.

It took us till September 8, 2017 to get a technician! We spent all of August trying to get that to happen.

The technician ordered a new ice maker. Appears that Samsung ice makers are FAMOUS for failing after a few months! Best Buy knows that though they promote Samsung refrigerators in a BIG way (because they get promotional bonuses from Samsung).

The following week we discovered that Samsung closed the Trouble Ticket so the order got cancelled!

More calls. Lots of calls. Hours on the phone.

Then finally on September 19, 2017 they sent us, via e-mail, a supposed Return Authorization (RMA) — for Best Buy.

Called Best Buy with it. They wanted us to come in. So we made the 40-minute trek, one-way. The RMA was NOT on their system.

Best Buy said it could take up to 2-weeks for it to get loaded by Samsung into their system.

Then FINALLY last Friday Best Buy was able to honor the RMA.

We did not get a Samsung. We bought a Whirlpool.

It appears that Samsung ONLY loaded the RMA into the Best Buy system on October 11, 2017. 22-days after they sent us the RMA. 3 weeks.

Luckily this was only the ice-maker not working.

What would have happened IF it was the entire refrigerator?

Best Buy, by the way, were EXCELLENT! Outstanding. Did everything they could to help. Kudos & Thank YOU.

DO NOT BUY, Samsung.

Transpires, that 2-weeks ago, they fobbed us off by giving us a BOGUS ‘return authorization’ (RMA) number. For 2-weeks now we have been calling and visiting Best Buy to see whether we can arrange for a replacement. Best Buy could NOT do anything because they had given us a BOGUS number!

They LIED to us. Plain and simple.

Just spent 45-minutes on the phone talking to 2 call centers. They think it is FUNNY. They have no intention of making this good.

I filed a BBB complaint. I checked with them yesterday. Samsung USA has NOT responded.

DO NOT BUY, Samsung.

Bloody Samsung finally, finally, finally sent a technician on September 8, 2017 to look at the non-functioning ice-maker. He took one look and said you need a NEW ice-maker and I will order one for you.

Then Samsung CLOSED the Trouble Ticket — so that the technician can’t order a new one! Just bloody amazing.

So, we have no recourse. They closed the Trouble Ticket without fixing ANYTHING. It is beyond the pale.

I have had fairly good luck with the BBB. So, I am hoping that they will bail me out again.

WMUR proves yet again that they have NO shame or scruples.

As they do each winter they pick an oil company and obsesses about them ad infinitum.
Yes, I fully appreciate that that that is a worthy cause and that IF I was not getting oil
delivered, I too would be beside myself.

My issue is that as many folks as affected by Fred Fuller are probably also IMPACTED by Anthem’s inability
to enroll applicants who think they finally got health insurance in N.H. via healthcare.gov.

But multiple stories per day on Fred Fuller,
NOTHING about Anthem or healtcare!

Why? Anthem has a HUGE Ad. budget.

IF Fred Fuller spent millions advertising on WMUR
they would conveniently forget to mention Fred Fuller.

Just one of the many Fred Fuller stories by WMUR.

If NOT that would be rather funny, in light of this.
Maybe the teachers and kids can have another
few days off because of lack of heat.
I would LIKE that. I like having the kids at home!

The CLOUT of the Advertising Dollars.

Anthem’s systems are so bogged down and malfunctioning that they are now trying to process
enrollments by HAND!

Heard it from the horse’s mouth itself yesterday.

Yes, I called again yesterday.
After a 97 minute hold I got through.

I still don’t have coverage
DESPITE now 2 confirmation e-mails!

They admit that they can’t cope
and that they have basically given up.

But, here is the doozie.

They are blackmailing all media outlets from reporting about it.

I have called up WMUR multiple times since Thursday to tell them that they need to cover this.

Notice they are covering the ‘Fred Fuller‘ non-story.

BUT not a peep about Anthem.

Anthem has GAGGED them.

But, Anthem & Wellpoint stock will soar.

Just one continuous chain of fraud, deception and duplicity.

Despite TWO (2) confirmation e-mails saying I submitted my 1st month premium
Anthem maintains that I have NO coverage because I have NOT paid.

So today I filed a complaint with the N.H. Attorney General.

Yesterday I filed an official complaint with the N.H. Insurance Department.

I am NOT going to let these bastards get away with this.

Here is the e-mail I got from Anthem,
on December 27,
which I did publish in this post.

Well I noticed that the monies were not taken from my credit card.

So this morning I called. After 57 minutes on hold finally got an Indian who could barely speak English!
That was great.
After putting me on hold, multiple times, he finally told me,
in broken English,
that my payment didn’t get processed.

So I opted to do it this time online, at this URL as I had received in a letter:
https://shop.anthem.com/sales/eox/payment/enroll/landing/nh

Very encouraging when you see this greeting!

I paid again, ONLINE, with my credit card.

Got the VERY SAME e-mail again. But I don’t see a transaction at the credit card end.

Click to ENLARGE and read error message from U.S. Cellular.

I had noticed that they were having Website issues a few weeks ago but hadn’t given it much notice. Everything I did with U. S. Cellular, who had been my cell provider for over 12 years, was automated and rote. So I didn’t really have to do anything. They auto billed my credit card etc.

Today was a different matter.

I finally pulled the trigger. I switched to Consumer Cellular (with my AARP discount). That was as smooth as could have been. Wow. Talk about simple, straightforward and great support. Bang, bang, bang. They transferred two numbers over from U. S. Cellular, activated the service and then confirmed, an hour later, via a text message, that the two-way cell phone number transfers had been successfully achieved. Nothing but kudos for them. Very different to my abortive attempt with Walmart’s Straight Talk. More about my great experience with Consumer Cellular in a later post.

Though my account with U.S. Cellular should automatically cancel within 24 hours, now that the numbers have been successfully ported, I do NOT trust U. S. Cellular.

I tried to cancel using the Website. That didn’t go well.

Around 7:40 pm I call 611. They did say that they had long wait times because of Website and billing problems! After 45 minutes on hold, with the same bloody annoying message claiming that they can prolong your life I was disconnected.

I tried again, while watching cricket at 10 pm. 50 minutes later I got to talk to a rep.

As soon as I said I wanted to cancel she said she had to transfer me! Back on hold again.

I stayed on hold till midnight. That was a full two hours.

During that time, while I also did some research into the fascinating 18-year long Trent Council of the 16th century, I:

1/ Used U. S. Cellular’s e-mail system to request a cancellation.

2/ Filed an online complaint against U. S. Cellular with the FCC.

3/ Filed a complaint against U. S. Cellular with the Better Business Bureau (BBB) given the recent success I have had with them.

4/ I also cancelled my autopay.

What more can I do?

Just a heads up. If you need to contact U. S. Cellular you might be out of LUCK.

Of course I am delighted. Also impressed that they confessed and decided to do the right thing. That is always good.

But, this was a LOT of hassle. I spent over 4 hours on the phone — and with me, it is always the principle of the matter, rather than the dollar amount (though that is important too). Yes, I did file a complaint with the N.C. BBB — and they will now close to out, as they should, saying matter fully resolved. But, it will be there as a warning to others.

Given that I also complained to DirecTV that I was scammed by one of THEIR authorized resellers I got some ‘non-monetary’ compensation from them too — as I should, given the aggravation. So I kind of made out, as I also did when DISH dropped NEO and TEN Cricket from their ‘Cricket Pack’. But, I am an expert and complaining.

I worry about people who get scammed by these resellers.

So be warned. Be careful. Be very careful.