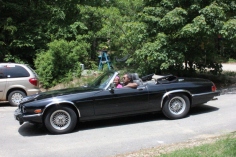 “Europeans Cars“, on eBay, Dave Gitman (of Car Cheer, Trevose, PA), is whom we got our 2002 Jaguar XJ8 from. To say that I am pleased with it would be the understatement of the year. I can’t, of course, talk about other transactions — because I do NOT have a clue — but Dave Gitman, “Europeans Cars”, did us PROUD with our Jag. That is all I can say. Oh yes, I had my doubts and moments of panic BEFORE I got to know Mr. Gitman. But he is a decent family man! I will, without hesitation, by another car, ideally a Jag, from Dave.

These two Jags are gems and look the part too with the blue tones. Dave tells me that these are rare colors. I believe him. I don’t think I have seen those before. LUCKILY for me (given that I cannot afford either of these Jags) I can honestly say, and Devanee (14) my conscience when it comes to cars will attest, I do not like blue cars. I had one that was forced on me by a Leyland dealer in Britain, a Pageant Blue Spitfire 1500. Hated the color. Haven’t owned a blue car since. When we were looking for Jags we saw some blue ones but it was easy for me to dismiss those.

Anywho, these two look real nice (if you are OK with the blues), exceptionally low miles and DECENT prices. Plus, Dave is GOOD. You can negotiate with him. At least in my case he was fair and decent. Call him on 215-470-3161. Most times he will answer QUICKLY. Tell him “Anu (the Brown guy)“ told you to call. He might be even nicer to you. Dave and I chat.

I have already said GOOD things about Dave Gitman of ‘Car Cheer’, in Trevose (outside of Philadelphia), who sells lots of cars on eBay under the name “European-Cars”.

We got our Jag XJ8 from Dave via eBay.

Well I had it inspected for its N.H. Inspection Sticker (by “B-Boys” of Barnstead, NH) yesterday and had it registered, in NH, at the Alton Town Office on Monday.

In both instances everything went well without a hitch and that is why I felt compelled to say MORE good things about Dave and his operation.

The paperwork that Dave supplied (albeit for a small charge) was immaculate. The NH registration was completed without a single query or ‘do you have this‘. I liked that. So, paperwork, as he said it would be, was PERFECT. He has a wonderful, very proficient, assistant and she did us all proud. [Thank you.]

The car sailed through the inspection. Found nothing wrong. Paul Bousquet even went onto say that everything underneath was in excellent shape! His only concern was that I might have a problem opening the driver’s door from the inside. I had to laugh. The first time I was in the car I too thought that I was stuck and that the driver’s door would not open. I shouted at Dave. He laughed. It works FINE — the handle needs to be pressed harder than you would expect. Now that I am used to it I don’t think twice about it. Door opens fine. So that was the ONLY ‘problem’ that Paul found. I am delighted.

So credit where credit is due.

I can ONLY talk about my transaction and Dave did GOOD.

So, I will wholeheartedly recommend Dave, “Car Cheer” and “European-Cars”.

Yes, of course, being the professional cynic that I am I was skeptical and somewhat concerned buying a car, over the Internet. But, Dave showed me that it can be done and it can be done with great success.

Click to ENLARGE. This was the original eBay listing. NO. I didn’t even pay CLOSE to what was beiing asked. SMILE.

I had questions as to the condition of the car. Said very CLEARLY … Call and ask for ‘Dave’. I did. He answered at once.

Though I saw it (and followed it for sometime) on eBay I did NOT end up buying our Jaguar XJ8 via eBay.

Dave Gitman, who I called up to inquire about shipping options etc., was adamant that we should complete the deal, on the phone, on the spot, outside of eBay.

I, as a 13 year veteran of eBay & an eBay shareholder, KNEW what we were BOTH doing.

I wanted the car and I wasn’t that concerned about getting eBay’s buyer’s protection on this car. I was NOT going to buy the car sight unseen and all that I was risking was a $500 ‘deposit’.

But, buying an item OUTSIDE of eBay bothers me for 3 reasons.

I have no issues with this car, with Dave Gitman nor European-Cars. I am happy with this car. IF there are issues with it, and I do KNOW it is a 13 year old car with 58K miles on it, I will get it fixed. So this has NOTHING to do with sour grapes, buyer’s remorse or any dissatisfaction with the car.

1. Why does eBay claim to have a STRICT policy about selling outside of eBay and then let folks ignore it with impunity?

2. As a shareholder it bothers me that eBay is losing revenue (though IRONICALLY, despite the $9K value of the transaction, all that eBay would have lost is $50!)

3. Less savvy buyers are losing out on eBay’s ‘protection’, however, small it may be.

I spoke to Dave, when we met, about him selling OUTSIDE of eBay. He claimed that eBay was aware of what he does and that eBay does NOT CARE. He spends $13K to $14K a month on listings and eBay is happy with just that …

He likes to sell outside of eBay to avoid the eBay FEEDBACK ‘hassle’ and I, as a seller, can empathize.

But, it bothers me — mainly as a shareholder.

Last night I called eBay and had a 40 minute, somewhat animated, ‘chat’ with a representative.

He really couldn’t understand what my concern was. Kept on saying “if you are happy with the car WHY are you bothering ‘me’?”. I kept on explaining that my concern was as a shareholder. This morning I called and left a message with eBay investor relations.

Yes, I am an ol’ pedant. I will readily admit to it.

I do NOT like duplicity. To me eBay is being duplicitous.

I do NOT blame Dave Gitman. I kind of like Dave. He is ‘OK’. He reminds me of me. IF he can get away with it, I don’t blame him for trying to sell outside eBay. Yes, I know that eBay makes a lot of money from him.

But I had to bring this up.

Why did I buy it — outside of eBay. Because I wanted THIS car. I was NOT going to run the risk of losing it. No excuses. 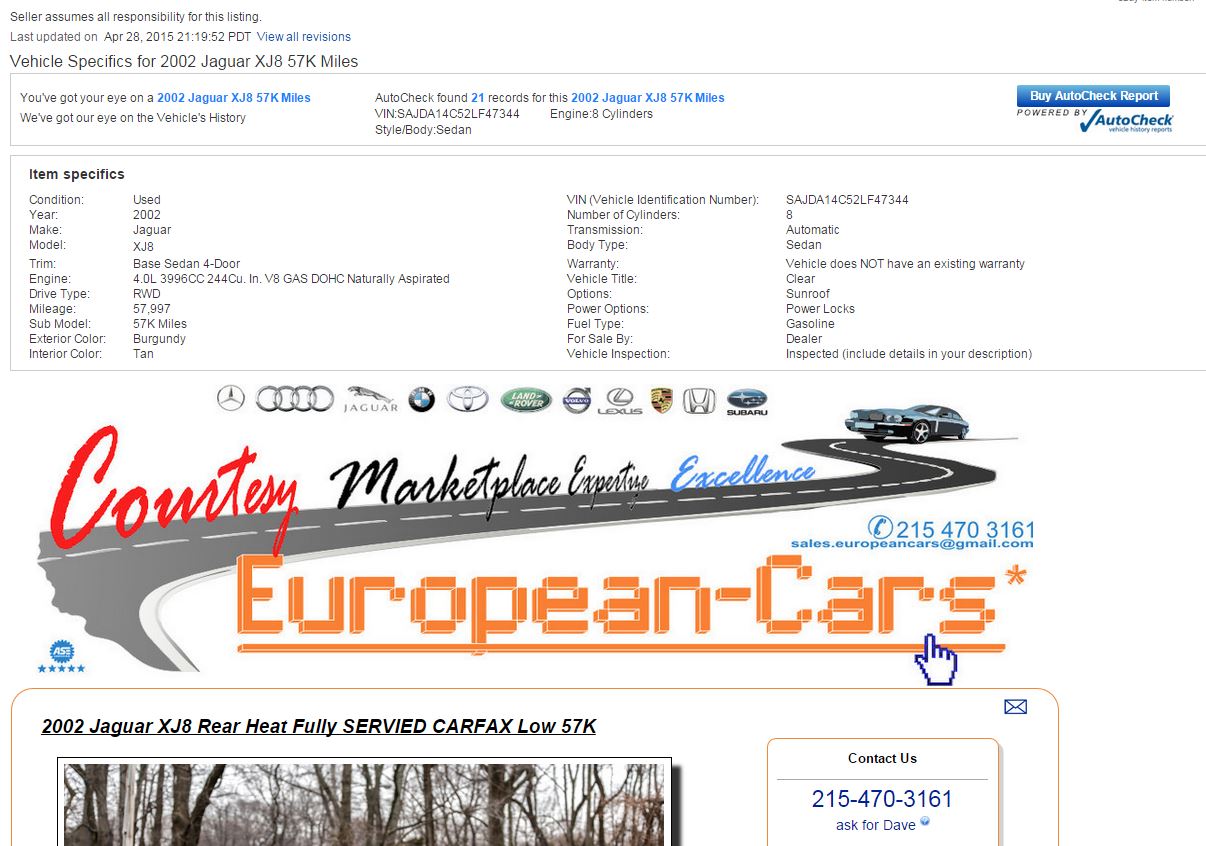 A Jaguar has been on the cards since last September — once we got the 1968 Green MGB. Our lease on the KIA Sportage was expiring in May/June 2015 and Devanee and I prevailed that we should get a Jag as the replacement. Initially it was going to be a ‘practical’ AWD X-Type. ‘We’, Devanee & I, looked at quite a few, online, over the winter. We were going to get a British Racing Green (BRG) to match the MGB. But, lets face it the X-Type is not a quintessential Jag.

And then a couple of months ago Deanna let it slip that she would quite FANCY a V-8 Jag. The die was cast. We would get a XJ-8 — because now we had at least a partial vote from Deanna.

I started looking. The KIA goes back May 29. Not many GOOD, ‘low-milage’ Jags for sale in New England — especially NOT New Hampshire. Found a few in Maine and Mass. I waited until we got back from Arizona. Then we were in May and it was time to act.

I checked out various online sites including eBay. I ‘really’ wanted an XJR with the turbos. Could have had one shipped from Houston, Texas BUT getting a car shipped, sight unseen, did not appeal.

Started looking at eBay in earnest. There were a few Jags I liked and they were ALL from ‘European-Cars‘ outside Philadelphia. I had spoken with ‘Dave’, the person listed in all the ads. , preliminarily, about shipping options, before we went to Arizona. A few days after we got back from Canyon de Chelly, and with my latest book published, I felt I had the time to get this done once and for all. I kept on coming back to this 2002 Burgundy XJ8, with ’57K’. Showed it and a few others to Devanee and Deanna. Tesichan didn’t really care one way or another. I knew what Devanee would pick. Deanna is also liked the Burgundy.

I called up Dave on May 8, 2015 — the first Friday after Arizona. We agreed on a price. It was more than double Kelley Blue Book but Kelley really doesn’t have a clue as to what low-milage Jags sell for.

Deanna, with her bad back, would not have been happy driving up from Philadelphia. So the plan, all along, was to go down with the two kids, pick up the Jag and drive it back. The kids had never been to Philadelphia and they have, of late, become avid tourists. Then came the the Brandon Bostian Amtrak 188 crash. We were going to go Thursday, after school, and drive back Friday. Well the best laid plans of mice and men.

The kids and I left at 3:15 am on Saturday morning. Coach to Boston South Station. Amtrak to New York City. Times Square. 6pm Greyhound to Philadelphia. Get there just before 8pm. Wyndham Philadelphia Historic District. All day Sunday and Monday morning to explore. Betsy Ross house, Art Museum, Zoo, Balloon ride, Liberty Bell, horse carriage ride, Rodin exhibit, Chinatown for Dinner, Reading Market for Breakfast, a tour of the Mint AMONG other things. Picked up the Jag, from Dave, at 1pm. Drove back 390 miles. Traffic, in places was horrendous. One spectacular van accident. WOW! We stopped. The car was wonderful. Devanne adores it. Teischan likes it. I am very pleased. No buyer’s remorse at all, at all.

“European-Cars” (also known by at least 2 other names, including “Car Cheer”) is OK. Dave is OK.

You can dismiss most, if NOT ALL, the negative reviews you will find online about them.

I will write separate posts on “European-Cars” & Dave. But, trust me, they are OK. I would buy from Dave again — and there is a pretty good chance that this might happen sooner than you think. SMILE. We are still one car short. Devanee and I both feel that we really must have an Jaguar XJS to drive around in the Summer/Fall. SMILE.

Bottom line. We are very pleased with the XJ8 we got from Dave at “European-Cars”.