This made me so, so, so HAPPY. Wow. Best news of 2021. Confirmation that life is going back to NORMAL. Rejoice!

Of all of the COVID-induced tribulations of 2020, the one that impacted I the MOST was not being able to go to ‘Christmas Revels’ in Cambridge. I was crushed. My Christmas/New Year are NOT complete without Revels — Revels in Cambridge. I moped about this for months!

I had been hoping, in private, that Revels will be back in December 2021. Appears that it will.

Wow. I am so, so, so HAPPY. Did I already say that. This is great. This is fabulous.

Base data from the incomparable ‘timeanddate.com’. Click to ENLARGE and study.

Only Friday the 13th that fall in October count!

Full moon has nothing to do with it.

The superstition has to do with the dissolution of the Knights Templar.
And that happened on Friday, October 13, 1307.

This is December, NOT October, so Friday the 13th does NOT COUNT.

Repeat, does NOT count.

The ’13’ really has nothing to do with the supposed thirteen attendees at the ‘Last Supper’ — particularly since there is no consensus, at all (at all), that the ‘Last Supper’ took place on a Friday — that traditionally been the date of the Crucifixion, hence ‘Good Friday‘ at Easter.

The superstition about Fridays the 13th being unlucky really has its roots in Friday, October 13, 1307, when, with the blessing of the French Pope, Clement V, the French King, Philip IV, who was heavily in fiscal debt to the Templar’s (the original international bankers), had most of the Templars in France arrested.

It was a bad day for the Templars — and was really the first major financial crisis in world history.

Hence why people were afraid of Fridays the 13th. They didn’t want a repeat of what happened to the (far from) ‘poor’ Templars.

This fact tends to be forgotten.

Friday the 13th in October happens per a 5 to 6 year cycle with occasional 11-year gaps. 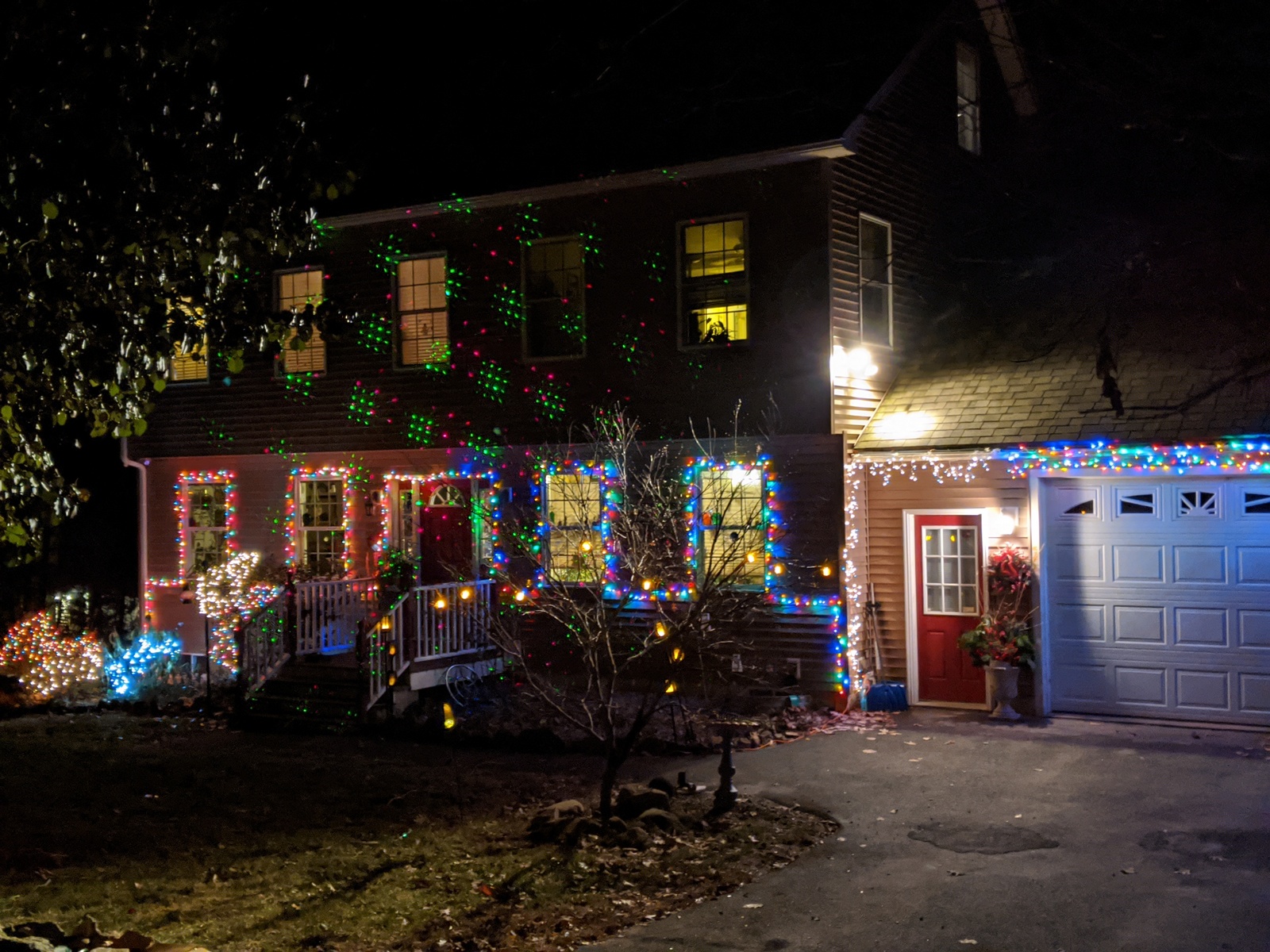 All her, i.e., Teischan’s (13), work. All I have to do is get the ladder out, find the lasers and bring them out and tell her which extensions cords will suffice. She does the rest all on her own. This is her 3rd year (is it 4th) doing it all on her own. She now knows even how to replace fuses. It is GREAT. I do remember the days when I had to do this.

Don’t tell anyone. OK? We let her stay home today so that she could put up the lights! She is, AGAIN, going to be homeschooled, soon — so, … She wouldn’t have done anything at school. anyway. Today was a day scheduled for ‘goofing’.

Week later than last year — and you can blame it on henna! On Saturday we went to get the henna and on Sunday she spent much of the day mastering it.

More lights to put out. One laser that is not connected and I might have to get a few other ‘illuminations’. We really need a more POWERFUL laser — one that will burn holes in the siding.

Stay tuned. Three weeks to go and Teischan and I have not made an emergency run to Lowes to get more lights! 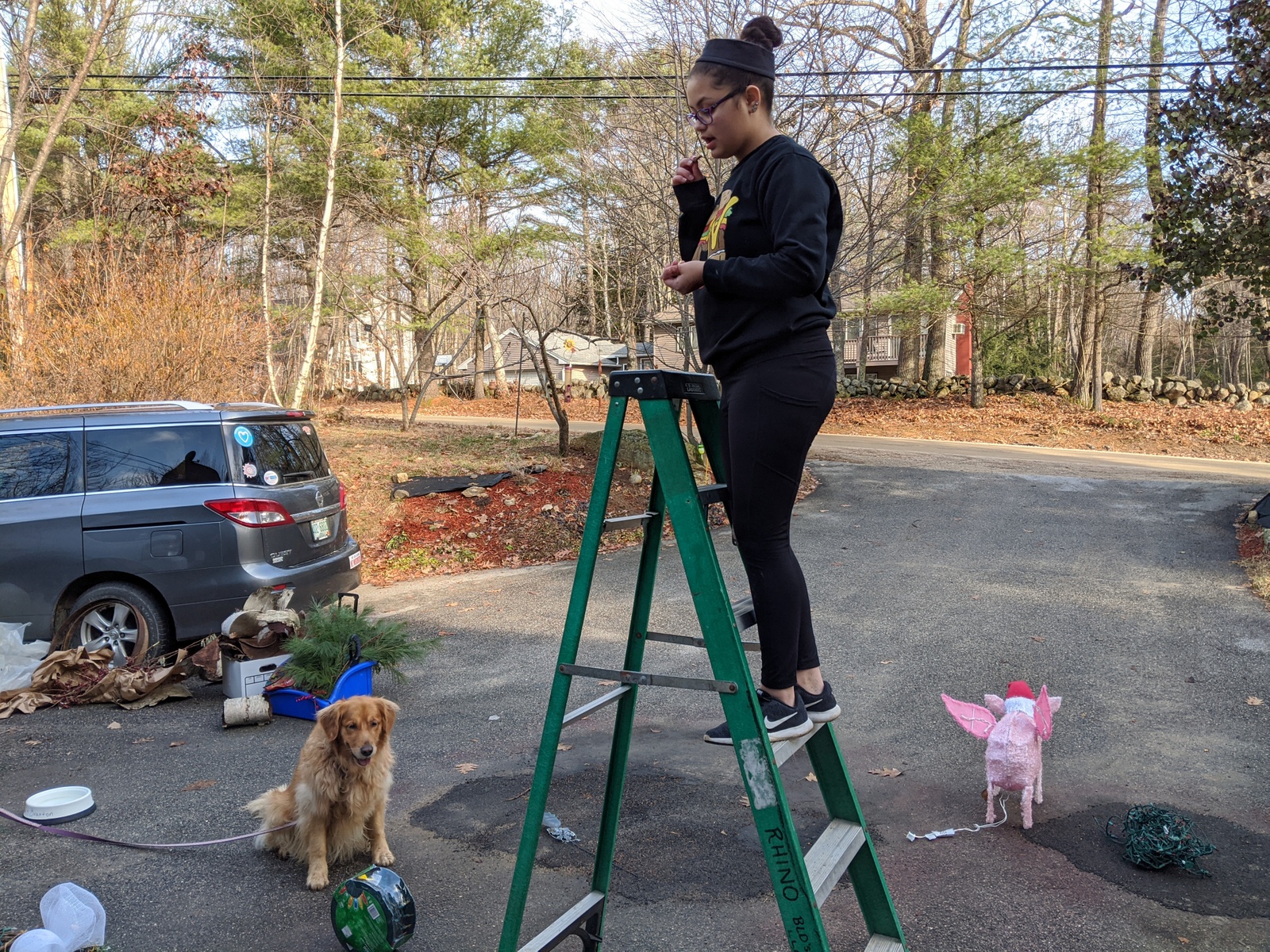 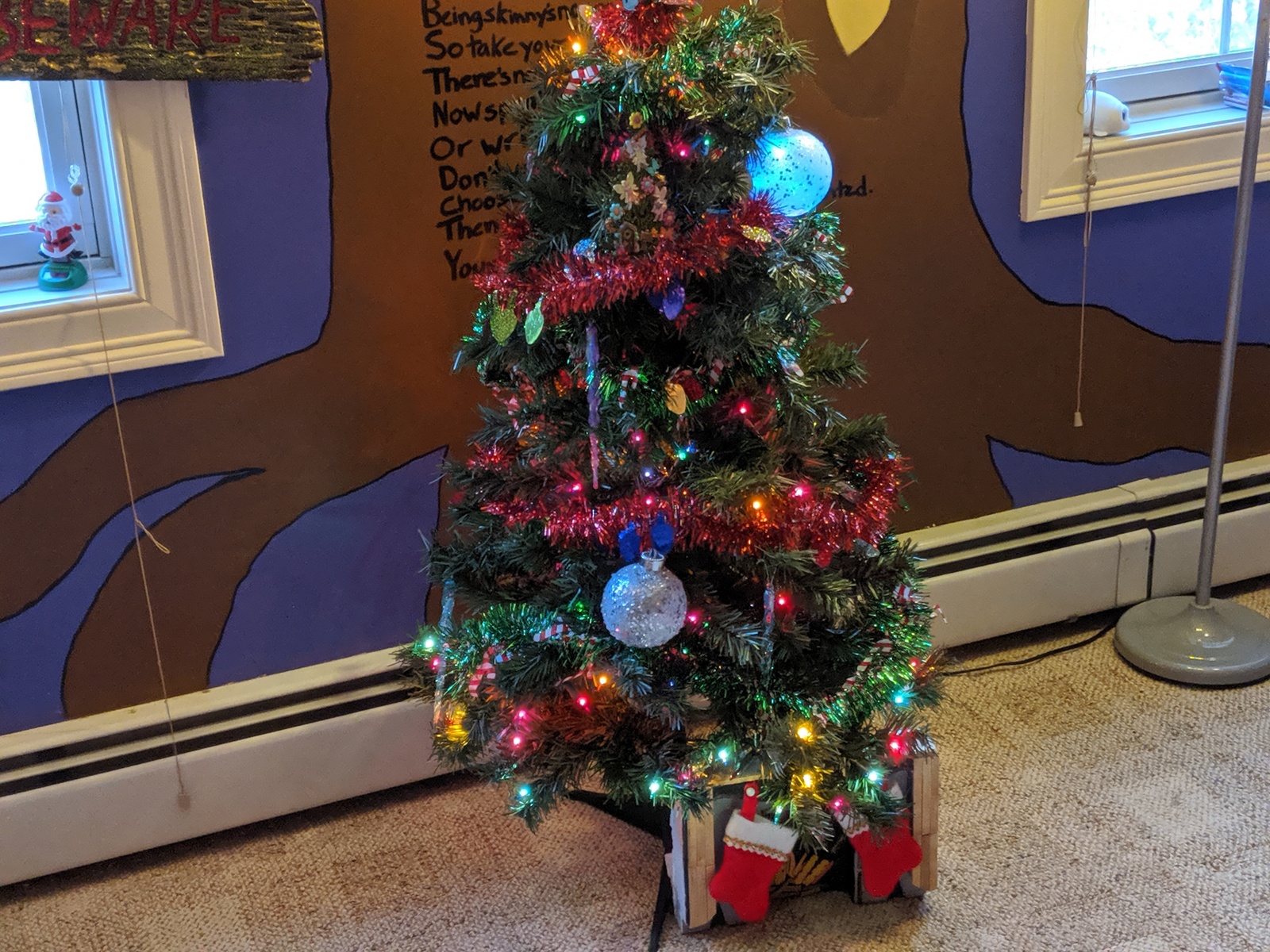 She has an even SMALLER one on her desk.

Teischan (12), unashamedly, lives for Christmas — and has for most of her life, once she worked out what it was all about.

She starts talking about Christmas in September!

When she was younger we could dictate as to when preparations for Christmas would come. But, starting last year she has taken matters into her own hands. When she was little we waited until at least the first week of December before we started.

For the last couple of years she can do it ALL without help. She can — and will — put out all the lights by herself.

She knows where HER artificial tree is stored and can go get it and set it up by herself.

Last year she set it up on November 17. The previous year it was November 27. At this rate she will have her tree up in October of next year!

She still has to wait for us to get the real trees. But, she will start nagging soon.

As happens quite often with us weather will intervene on Sunday — Monday when it comes to viewing Christmas Comet, 46P/Wirtanen. Yes, December 16 & December 17 are when it is closest to Earth. But, that does NOT mean that it will not be there on Tuesday or Wednesday. It will, albeit a bit further out and hence even fainter. So, binoculars would be a good idea.

So, do not despair. All is not lost. OK? 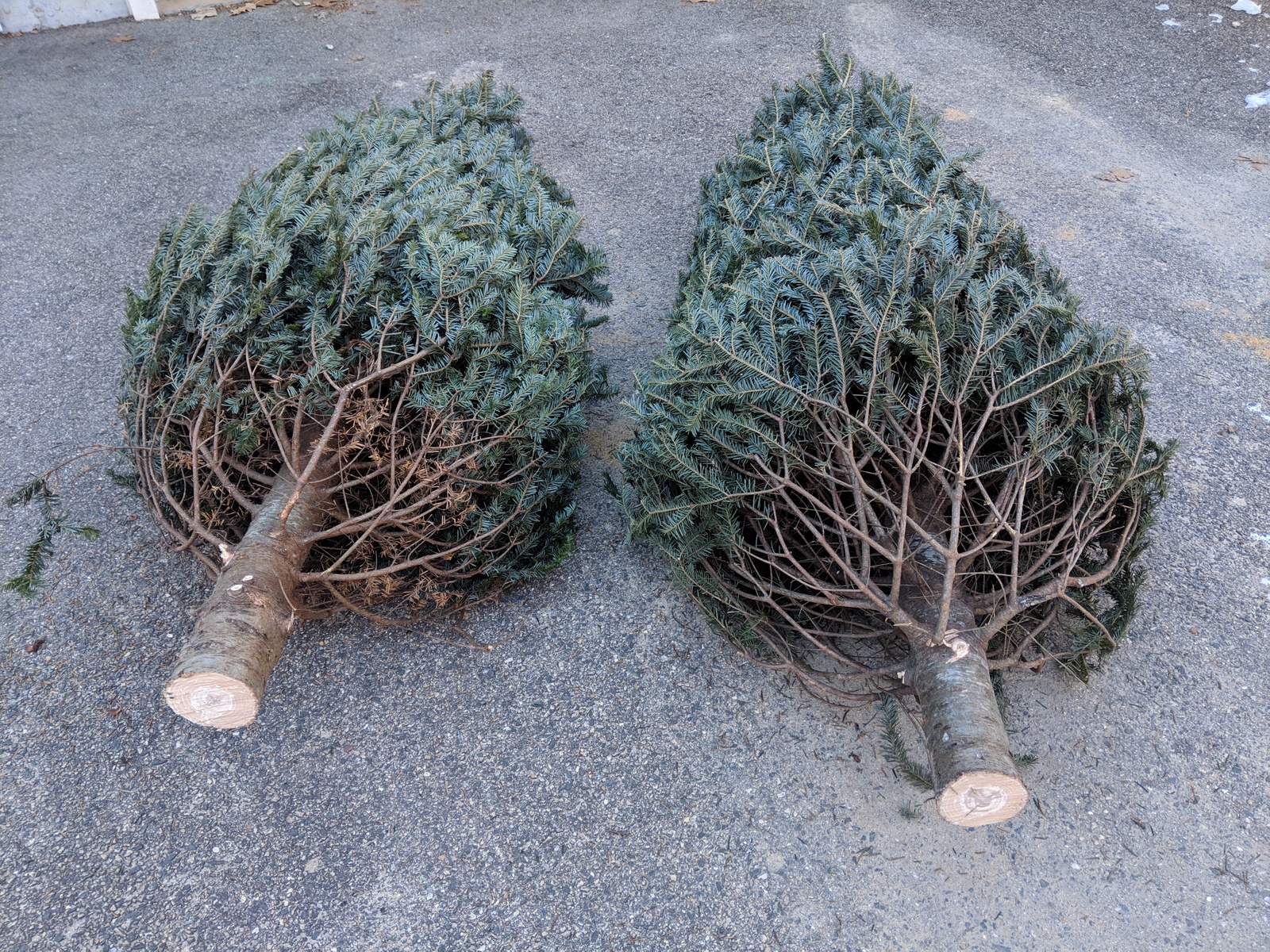 Teischan (12), as I may have mentioned more than once, lives, unashamedly, for Christmas — and has for most of her life, once she worked out what it was all about.

She starts talking about Christmas in September and it was no different this year though she is a year older! She started nagging me about getting the Christmas trees at Thanksgiving. I kept on saying: “in December, in December“.

We bought our Christmas trees locally in Alton last year. They were not doing trees this year. Then earlier this week, driving through Rochester we saw a sign that said that the boy scout troop will be selling Christmas trees, for $35/each, on Saturday, December 8, 2018 (and for that matter the Sunday also). Seemed like a good cause and the price was not bad. So, I agreed that today would be the day for the trees. Looking back I realize that we are 3 days behind what we were last year. No wonder she has been complaining.

Got the trees from the Scouts. Good deal. Lots of adults to help and they insisted on doing everything. For the first time ever I didn’t have to do anything. They put it on the roof and even tied it down. I was impressed. Going back to them next year, though Teischan, a connoisseur of Christmas trees, is not too happy with the two we got today. She does have a point. They both have a bald spot close to the top. Not too serious. But she noticed.

Anywho, all three trees are now up. They will decorate and put up the lights tomorrow.

It is expected to be just naked eye visible. Will definitely be able to see it with binoculars — and, of course, a telescope, even a small one. It will be a green fuzzy ball. There will be NO TAIL per se. So, don’t be looking for the tail. Just a fuzzy, glowing green ball. The green ball should be fairly big — bigger than a star.

For us in New England, the easiest bearing is going to be the easy to locate ‘winter cluster’ — Pleiades (the seven sisters). See the chart above.

I would be an untruth if I said she does this by choice or with grace. From these pictures and from what we could see she seems to enjoy it and was quite ebullient after it (though that could have been just a sense of relief and adrenaline). But, it was a struggle, quite a struggle, to get her to perform at this concert. I took grief from her nearly everyday. Claimed she hated it. Well, I got her to it and that was an achievement. Now, as she has already pointed out a number of times, we all get a break from band till next year. And trust me, I could do with that. Did I say it had been a struggle. This homeschooling lark is no easy — or at least not for I.

But, it was good. Always a joy to see the kids perform and all the relatives there to see them.

Happy Holidays. It is in full swing around here.

Teischan (12), unashamedly, lives for Christmas — and she was hell bent on putting up the Christmas lights today, having put up her personal Christmas tree yesterday.

As it transpired I had to make a trip with her to Walmart in Rochester to replenish our stock of lights. While we were at it we got a second laser light and a lighted flying pig.

So, this year November 18 vs. last year’s November 20. But, what a difference. Last year it was balmy and she was in shorts. This year we had 6″ snow on the ground and it was FREEZING. Given the temperature and the unscheduled trip to Walmart we didn’t get all the lights up today. I am sure they will all be done by tomorrow. 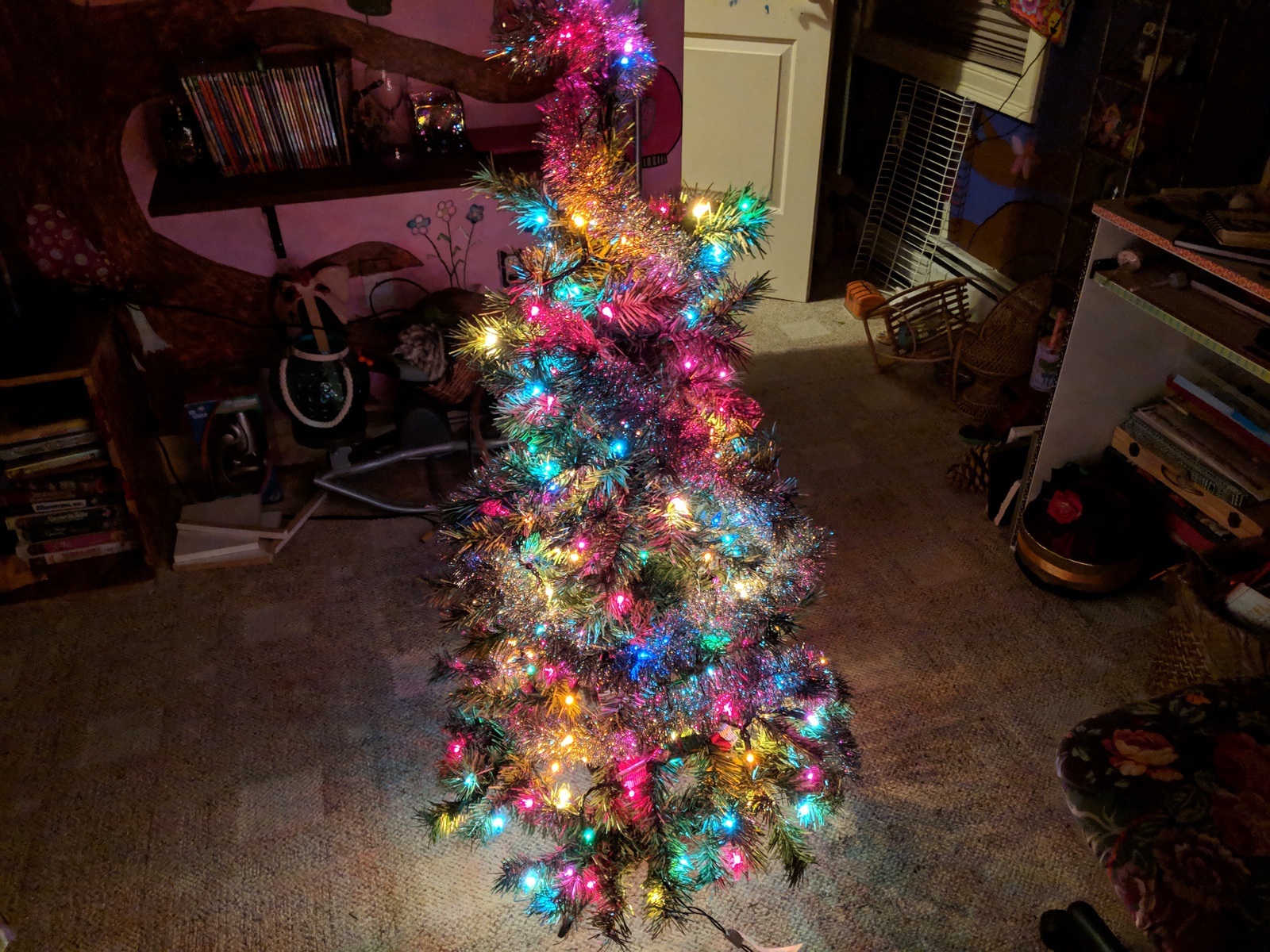 The “American Girl Dolls” are also getting ready for Christmas. 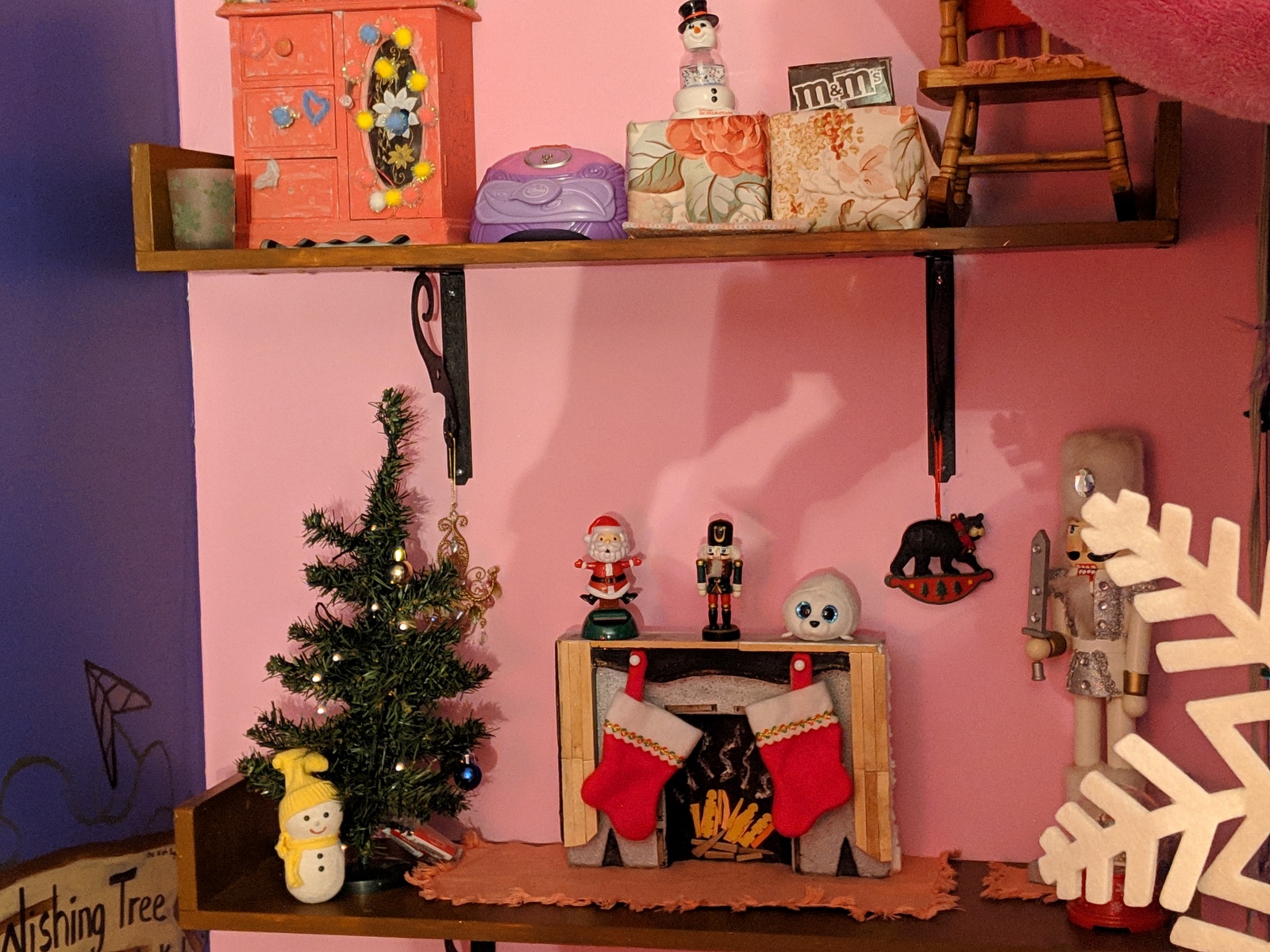 Advent Calendars have been located THOUGH we have 2 weeks (14-days) to go.

Teischan (12), unashamedly, lives for Christmas — and has for most of her life, once she worked out what it was all about.

She starts talking about Christmas in September!

When she was younger we could dictate as to when preparations for Christmas would come. But, starting last year she has taken matters into her own hands. When she was little we waited until at least the first week of December before we started.

Not anymore. I see that last year HER tree went up on November 27.

Well, this year it was November 17 — 10 full days earlier. She also, with my help, brought down (from the space above our double garage) some of the outdoor christmas lights — which she intends to put up tomorrow. That is one neat thing. She insists on doing this herself. I (at 65) am off the hook.

We started listening to Christmas music, on the radio, on FM 94.9, earlier this week. They too keep on bringing forward Christmas.

Stay tuned. Christmas is still 38 days away and we have many rituals to perform and observe.