This drawings are Copyright protected. 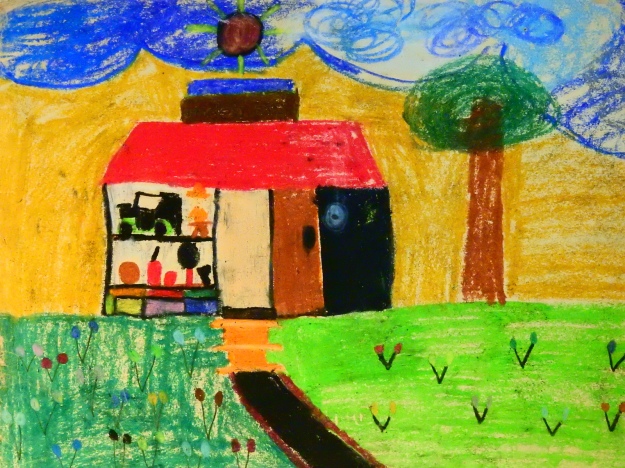 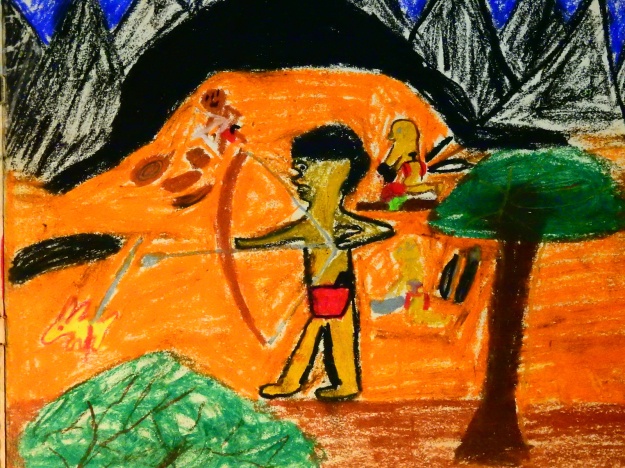 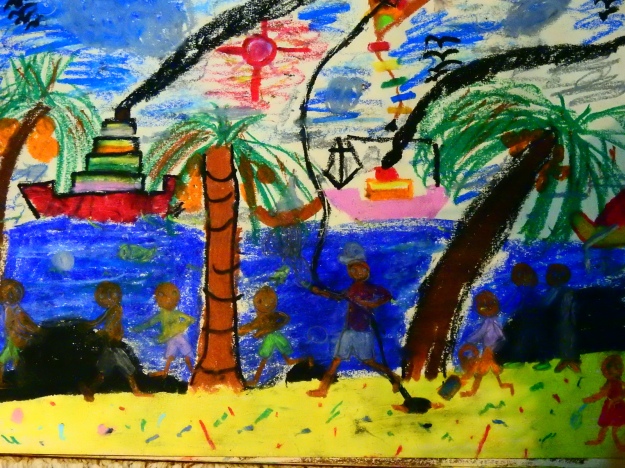 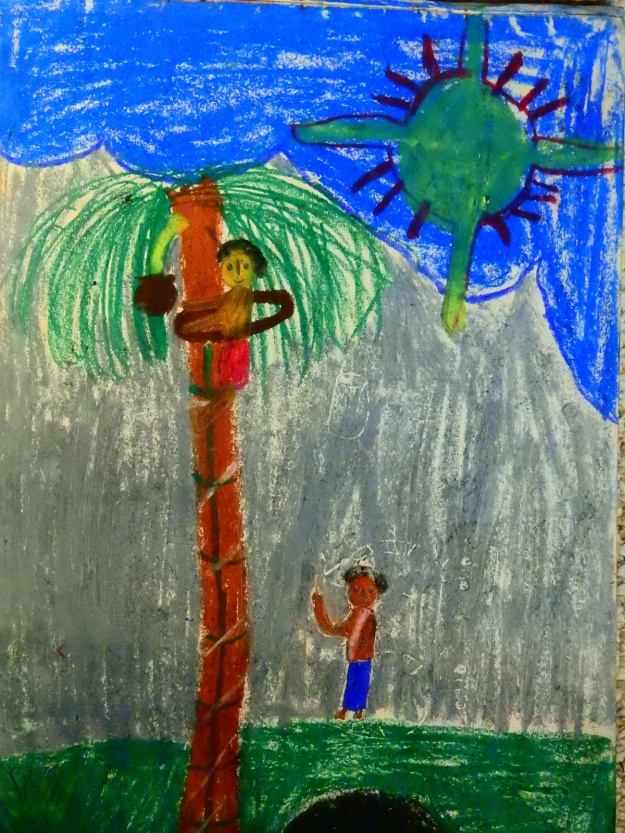 For those that are familiar with Ceylon/Sri Lanka the scenes should be recognizable! The beach, with the ships and a kite flyer is Galle Face, in Colombo.

The top picture is of Sri Lankan devil dancers.

A car on the 2nd floor of the house was NOT some aberration. That was actually the case. The house, the house that I lived in, was built on the side of a hill. So there was a level below the car porch, if you viewed the house from the back!

The hunter is a genuine Vedda — the original indigenous folks of the island. I had been out to see them.

Click to ENLARGE. “Raj Ghat” in New Delhi: The memorial in – Memorial marking the cremation spot of Mahatma Gandhi

I only discovered a few years ago, quite accidentally, that February 3, 1948 had been the day of Mahatma Gandhi’s Funeral.

I was quite taken aback.

His funeral pyre hardly had time to cool before Ceylon was celebrating its Independence. How ironic. We got our Independence on his back. India’s and Ceylon’s independence, 6 months apart, was essentially a joint deal, though it is never portrayed as such.

So, now, ahead of Independence Day I make a point of observing the anniversary of the GREAT MAN’s funeral.

These are Public Domain pictures
from the U.S. “Library of Congress”.

This statement about “occupied territory” appears in the very biased and unflattering article about Sri Lanka in the November 2016 issue of “National Geographic” (which focuses on travel to Mars). It is on page 108 of the printed magazine. See below to access it online.

Since when did Sri Lanka have “occupied territory”?

Does France have “occupied territory”?

Does Italy have “occupied territory”?

So why does Sri Lanka have “occupied territory”?

It was one UNIFIED country when it gained Independence on February 4, 1948.

So where is this “occupied territory”?

I found a copy, from “National Geographic” themselves, online!

Related Posts:
>> Check Category “Sri Lanka” for many other posts >>>>

But NO Google Doodle for 2016 as YET. But this can change.

So I will keep on checking.

These are Public Domain pictures.

I can, from my time in Ceylon 1953 to 1967, relate to ALL these pictures. I remember Colombo jetty when it was like that I have gone out on launches from that jetty many times to visit ships in the harbour. The Town Hall hasn’t changed any and Galle Face, at least the front, is just as I remember from my time. Peradeniya is much the same. So these are COOL. Not postcards per se. Cigarette Cards — which they used to include in packets. I have found about 240 of these.

Maybe Google, being California-based, will do a Google Doodle for the 6th rather than the 4th.

++++ Search on ‘Ceylon independence’ for MANY related posts >>>>

February 4, 2016 will be the 68th anniversary of Ceylon/Sri Lanka Independence — the great day having occurred in 1948.

If we are lucky Google will do a Doodle, for Sri Lanka Independence Day (which Google called ‘National Day‘), as they did in 2015 & 2013 (and MY request).

Around this time I start combing the Web looking for historic new stories or movie clips related to Independence. This is my first contribution this year.

++++ Search on ‘Ceylon independence’ for MANY related posts >>>>

Here is the link you want to get to the doodle: it takes you to Google’s Doodle homepage.

All Google Doodles, by definition, have a 24-hour shelf life.

Since it is no longer February 4, 2013 in Sri Lanka the doodle is history. Do not worry. It is not lost. It will appear here shortly.

I will post it from there later on today.

Of course it won’t appear on the search page.