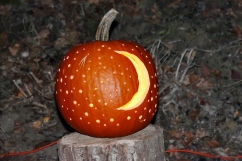 All pictures taken with a Panasonic Lumix FZ1000.

Attribution is a MUST.

This was PRETTY AMAZING and AWESOME.

It is at the corner of Route 28 and Hamwoods Road.
It is put on by Gary Sullivan.

Gary has been doing haunted houses for 21 years. But this is his first year in Alton. He moved to Alton from Farmington. Deanna had seen him, over the week, setting it all up. She kept on saying we need to go to the first house on Hamwoods. It was not a house we had normally stopped at in previous years. So I was a bit confused. But then I understood. It was definitely the highlight of the night.

Next year it will be bigger, laid out into the adjoining forest, ADULTS ONLY and there will be a $5 charge. It is FREE this year.

Gary has a HUGE investments in the props that are displayed. I was amazed. Go see. Tell him that the Brown Guy sent you.