All from ABOVE “Daily Mail” article.

Click to ENLARGE and read here. From above “Daily Mail” article.

So, British, and it was April Fool’s Day, but in this rare instance I was NOT amused. Brexit is deathly serious and we are at a crisis point. Today’s was a crucial debate and vote. This was not the time for this type of distraction.

Nudity and streaking are very British pastimes and we are usually more than happy to entertain them.

But, not during these crisis days of Brexit. Yes, climate change needs to be discussed BUT after Brexit.

All that said it was amusing enough and you can’t but applaud them for their audacity, planning and tenacity. SMILE. Ah! Us Brits — Brexit or no Brexit.

This all had to do with the ‘English Reformation‘ when Britain parted company with the Pope and as such the Roman Catholic Church.

This ‘Relief Act’ was a longtime coming.

The Proclamation was by the First Italian Parliament, meeting in Turin. The Parliament had been assembled by Victor Emmanuel.

On March 17, 1861, this Parliament proclaimed that Italy was once again UNITED and that Victor Emmanuel would be the new King of Italy.

It took ANOTHER 10-days before Rome was declared the capital of Italy — since they had to placate a very irate pope! 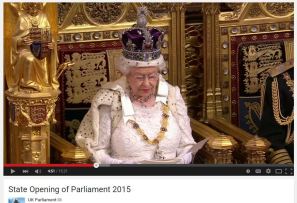 The U.K. Daily Mail, my all time favorite newspaper, as ever,
has the best pictures.
Here are just two cropped snippets.
Click here to access them all — 11 of them.

The Glorious British peerless pageantry at its very best. Makes me so proud to be British.

The Queen’s actual birthday was on April 21. She turned 89!

Trooping the Color is to mark her official, public Birthday. A Royal thing.

Trooping the Colour is a ceremony performed by regiments of the British and Commonwealth armies. It is a Battlefield tradition having to do with displaying once FLAGS that goes back to the 17 century.

The official, FULL-LENGTH, 15 minute video (in HD),
by the U.K. government, on YouTube. 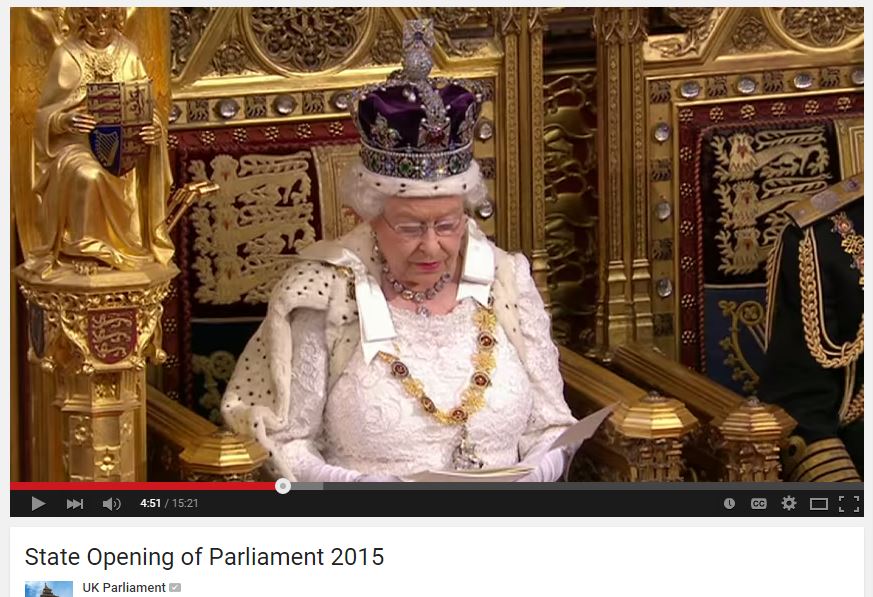 The official transcript of the speech by the U.K. Government at gov.uk. 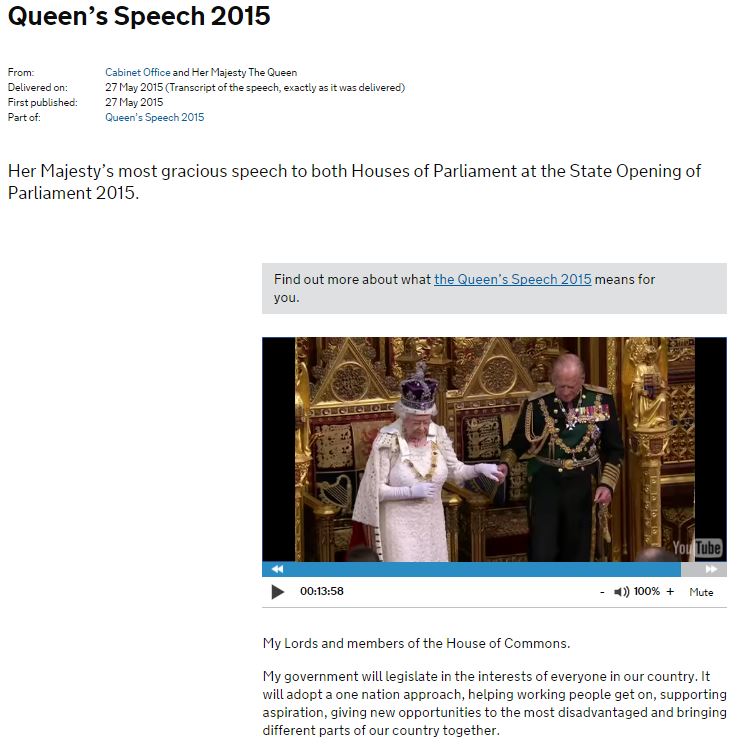 The BBC’s take on each of the proposed Bills
talked about by the Queen. 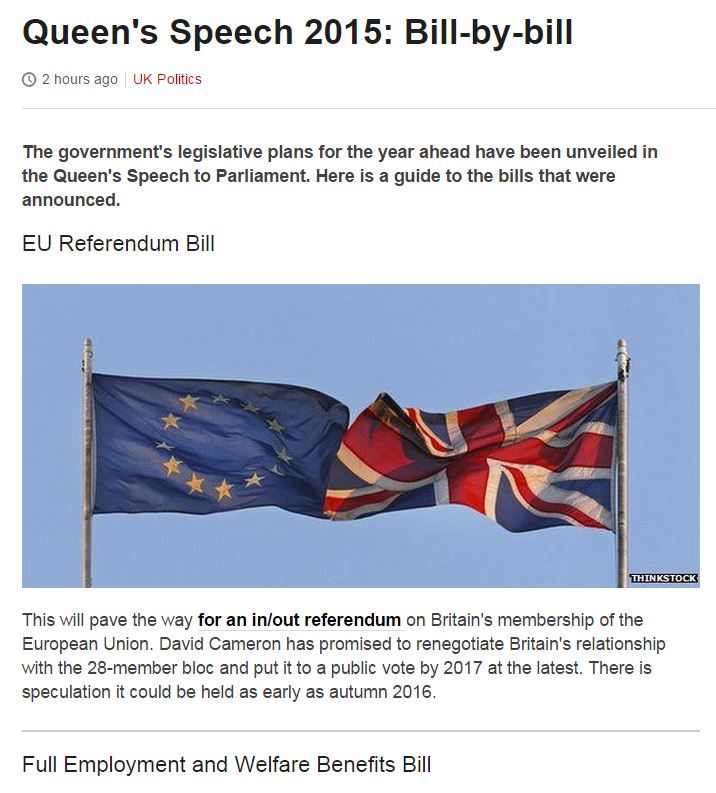 As ever, very good coverage of the issues involved by Reuters. 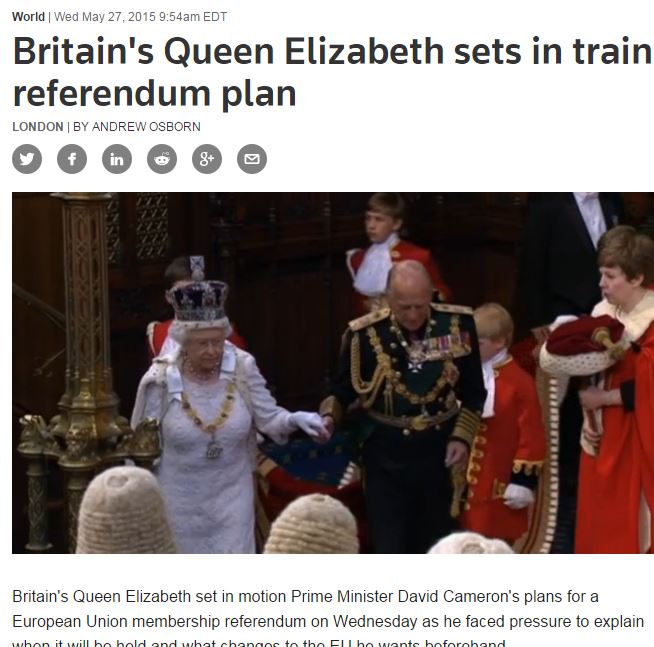 The issue closest and most dear to my heart is that of the
EU Referendum.

As I have mentioned, more than once, I voted AGAINST EU membership
in the FIRST referendum on this matter in 1975.

I have NEVER been a believer of EU membership.

We, THE BRITISH, don’t need the Europeans —
as much as they need us …

PLUS, and this is VERY important …

We, THE BRITISH, have
Glorious British Commonwealth.

Both images extracted from Friday, May 8, 2015 U.K. Daily Mail my primary and all time favorite news source. http://www.dailymail.co.uk/ushome/index.html. Click to ENLARGE and see in summary form here.

As I said yesterday, ahead of the election, I, though now known for my strong democrat leanings (in the U.S.), have never had any qualms about David Cameron. David Cameron is no Shrub, McCain, Mittens or Cruz. He comes across as very balanced, erudite, sane and human. I actually like. I hadn’t paid too much attention to what is platform was BUT now I am hearing that he might be bad news to the U.K. National Health System (NHS) and the still ‘cheap’ (if not ‘free’ as it was in my days) College system. It would appear the conservatives, in order to cut costs, favor a U.S.-like commercialized health and higher education system. That would be a mistake. But they plan to hold a referendum to see if the U.K. should get the hell out of the European Union. As I also said yesterday, I was one of the 2% that voted ‘NO’ in the 1975 ‘should we join the European Union’referendum. So another referendum on this thorny subject would please me. I think we will be better off out of the Union.

On the other hand I do NOT want to see another Scottish independence referendum. Last year’s one took 10 years from my already severely curtailed lifespan. As such the near clean sweep that the SNP enjoyed in Scotland scares and worries me. I want MY Great Britain to continue to be GREAT.

I am glad we did not end up with a hung parliament. Our parliament is great too and I like it working the way it should — the oldest parliament in the known Universe.

Just shown in the U.K.

I have, in marked contrast to my intense agitation leading up to the Scottish referendum last September, have remained quite ambivalent about this election — though I have been following it, in somewhat desultory manner, on SkyNews (on my Roku) and occasionally in the U.K. Daily Mail. The real issue is that I feel chagrined that I can’t vote — only being able to do so, as I am due, if I get over there for the election. I miss voting in elections. I have, in all my life, only voted in Britain — and while there I did so diligently without once missing a election or referendum. Yes, I am proud to say even 40 years later that I was one of the 2% that voted ‘NO’ in the 1975 ‘should we join the European Union’ referendum.

In addition, now that we averted the Scottish Independence nightmare I am not that concerned about U.K. politics — given that it is rarely ever as ugly, bitter and decisive as things tend to get over here. Plus the ‘red v. blue’ line is not as marked. Though I have been quite the Democrat since ‘Shrub’ declared his disastrous war, and want the White House to stay in safe Democrat hands for another 8 years, I have no qualms about David Cameron, though he is a Conservative. He is not rabid. He is quite sensible and sane. Plus there is the fact that I was a ‘right of Margaret Thatcher‘ conservative for well over two decades of my life. For reasons I still cannot put a finger on ‘Ed Miliband‘ does not ring true to me and it cannot be just his beliefs. More on that in another post. Furthermore, he, to me, looks Indian. Have you noticed that.

Hung parliament. Never a pleasant prospect. So lets wait and see what comes to pass.