Peripheral neuropathy — and with that possibly Central Pain Syndrome (CPS) — can be a not-widely-disclosed side effect of chemotherapy.

Patrice, my former colleague at CASE Communications, is finding this out the hard way, to her cost and chagrin. This is not good. CPS, as you may know, is debilitating and has no cure.

Here is another post, this one by the ‘Canadian Cancer Society‘: 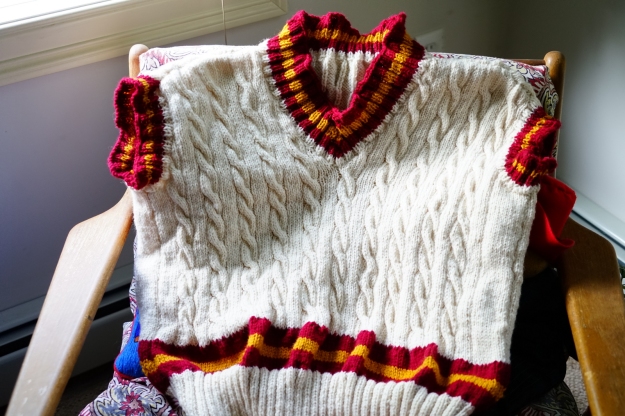 Earlier this year as Patrice was getting ready for her ‘3-months’ of cancer treatment she did a Facebook post asking if anybody wanted anything knitted since she had run out of ‘projects’ and ‘ideas’ and she wanted to have something to knit in the coming months.

I told her that I did not have any cricket sweaters that fitted and would love one in my ol’ Ananda College (Colombo, Sri Lanka) colors of maroon and gold. Patrice went to work, as she is wont, researching patterns, colors, wool types, needles etc. etc.

Over the months she gave all of us pithy updates on the progress of this sweater. It took her slightly longer than she had expected. But, it was always going to be for Fall 2017 in New Hampshire.

It arrived today — in the nick of time. The temperature is 58°F as I write this post.

It fits beautifully and all she requested from me was a measurement of my chest size.

I am impressed, amazed and very grateful.

I will wear this with pride and joy in the months to come. She informed me that it is washable. That is good. I do spill stuff.

So more pictures to come.

Patrice and I worked at CASE Communications, in Columbia, Maryland, 31-year ago. Her Dad worked for CASE too — and I worked with him for over a year before Patrice joined the crew. Her Dad, about the same age as my Adoptive Father, was my first mentor in the U.S. and a very good and dependable friend. He and I, I from the Britain and he from the U.S., were part of the original CASE U.S.A management team — CASE, a market-leading U.K. company having bought the U.S. Rixon Corporation to get a foothold in the U.S. Patrice was the Product Manager for Multiplexers. I was the Director of Marketing for Multiplexers. So she controlled my destiny. Her Dad was the Directing Marketing for Distributor Sales. He helped me sell through the ‘channels’ as we called it. So these two, daughter and dad, played a huge hand in my fortunes and income. They never let me down. A rarity at CASE.

I had lost touch with Patrice over the years, and alas Dad is no longer with us.

Just over a year ago, the unexpected death of two of our other colleagues, Don & Sandy Pyle, in that famous Christmas-tree fire of a multi-million dollar mansion, brought a few of us together — over social media.

I only found out that Patrice had cancer around Christmas. She kept it to herself until she decided she was not going to have the surgery.

She had asked me about doing a blog and I urged her to do so — and, of course, suggested WordPress.

I am a great believer that stories like this HAVE to be told. It is good for all. Therapeutic to write and inspirational to others. Plus, Patrice can write — and write well.

Patrice has to get better and not get too tired during the treatment because I have twisted her arm to proof my books. She is good with anything to do with words.

So, bookmark her blog. Wish her well. And follow her on her journey.