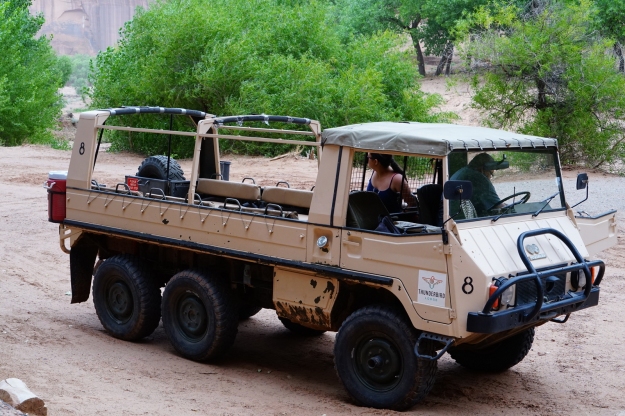 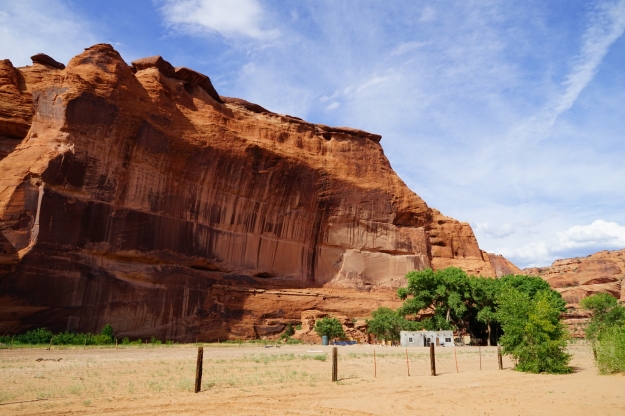 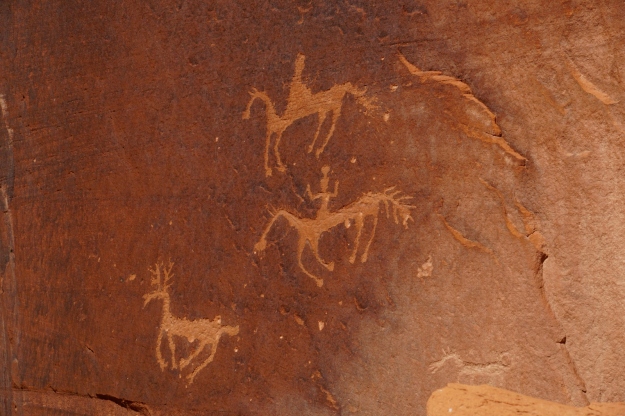 In reality this is the ONLY way to see and get to know Canyon de Chelly. Going into the Canyon on horseback is fun (and we have done it twice) but you can’t cover as much ground and, from our experience, the guides that do horseback are not as ‘proficient’ as those on the ‘jeeps’. (But, there could be exceptions and we LUCKED out in that we got ‘Daniel Draper’ who has been doing jeep tours for 29-years). Yes, you can hike down to the ‘White House‘ (which we have also done twice) but you don’t get to see any of the key ‘pictographs‘ (painted) or ‘petroglyphs‘ (carved).

This was the second time I had done a ‘Thunderbird Lodge Tour‘ — albeit 19-years apart. The first time, in 1999, was in the BIGGER Korean-war era Army vehicles they used to have. But, then there was the infamous 2012 roll-over that (eventually) killed two. Everything changed after that — including the ownership of the iconic & historic ‘Thunderbird Lodge’. The 6-wheelers they use now are smaller and newer.

We lucked out — as was invariably the case during this entire 4-day trip to the Canyon (my 4th). Very few people. Most of the time, wherever we would be the only ones there. That is nice and highlights the trademark serenity of the Canyon (which is my favorite part).

We did not book a private tour. We just booked (in the morning) the 4-hour, 4pm (sunset) tour. We were told be there 20-minutes early.

Well it was just the two us, Teischan & I, and that was special. I, with extensive experience with Navajo, soon established a good rapport with Daniel — and I think he enjoyed it too, in that I was not a total novice when it came to the Canyon or the Navajo. We had such a good time that I invited Daniel and his two daughters for dinner with us (at ‘The Junction‘) and they accepted. We had a great time and the two, extremely talented daughters, regaled us with songs after the dinner.

The tour was good. We learnt a lot.

Totally recommend it. Yes, there are other tours. From what I can see they are roughly the same price, i.e., ~$70/person for 3-4 hours. But, I liked the tour we took.