Samsung Watch 3 on its own.

Samsung Watch 3 (on right) next to Garmin Fenix 6
— both titanium.

The display on the Samsung ‘Watch 3’ is absolutely BRILLIANT — in every way, & the much-vaunted rotating bezel is just great. But, beyond that the Watch 3 disappoints.

Yes, I am comparing it to a Garmin Fenix 6 — which is a more expensive watch. I appreciate & acknowledge that. But, I discovered today, to my cost & chagrin, that you can’t move from a Garmin Fenix 6 to the Watch 3. Just doesn’t cut it.

Here are the MAIN things I found beyond trying:

Bottom line was that the Watch 3 is 75% — ‘pretty display’, BUT even that is muddied by the stupid “Outdoor Mode” & erratic “Aways On”.

Yes, it would have been very different IF I wasn’t coming from a Fenix 6. If it is to be your first smartwatch you will probably LOVE it. SMILE.

Samsung Watch 3 in the Middle. 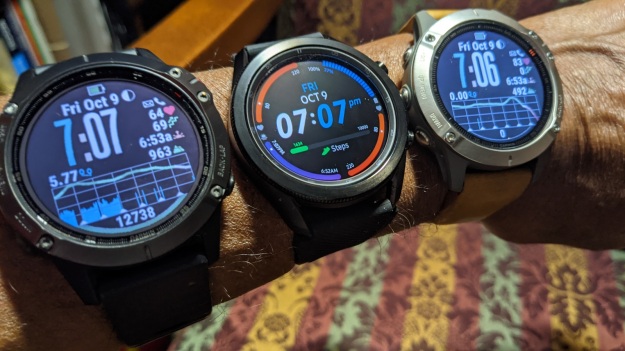 All three watches Titanium; two Garmin Fenix 6 Pros (one Solar) & the other (in the Middle) the new Samsung ‘Watch 3’.

What can I say. I like Titanium. It is lighter for a start & supposedly more forgiving. 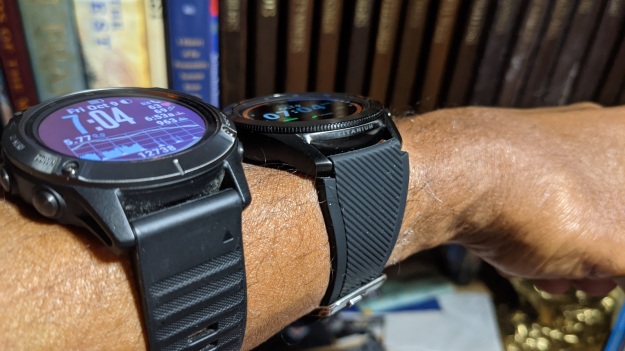 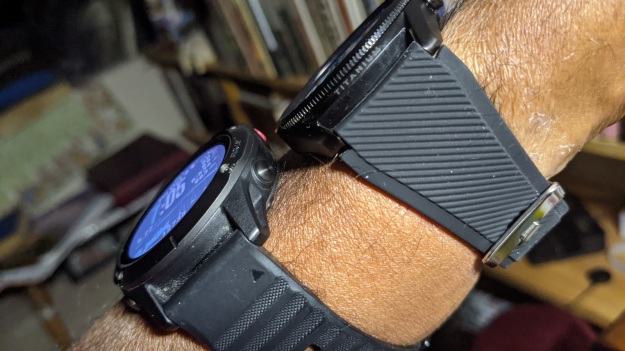 I had to try it, viz., the Samsung ‘Watch 3’. And if I was going to try it, it had to be Titanium.  I am a sucker for BOTH AMOLED displays & Titanium. Well, Samsung indulges I, but alas Garmin only gives me Titanium.

I do like the display on the Samsung. To I that is the MAIN reason to get it. Very different watches. The Garmin, of course more expensive, is feature & function rich. But, now the irony. At 67 what I do MAINLY is walk/hike & clock up elevation (i.e., ‘floors’). The Samsung can handle that, plus Heart Rate & blood oxygen saturation. Supposedly it can do VO2 MAX but I haven’t found it. Plus, it has watch faces galore.

Yes, battery life, especially with the ‘Always On Display’ I INSIST on, ON, is appalling! I keep on charging it when I am seated — typing!

Well, lets see how it works out. Not my first Samsung Smartwatch. I treated myself at Christmas 2017 to a Samsung ‘Frontier S3’. But, I hardly worse it & eventually sold it, for a good price, on eBay. So, who knows. I will keep you posted.

Would appear they jumped the gun. That they are only offering grey is another clue that they somehow did NOT wait for Garmin’s announcement. Maybe they were confused given that it was supposed to be announced last week.

Garmin’s announcement of the ‘Venu SQ‘ is said to be towards the end of this month, i.e., September 2020.

The ‘Venu SQ’ was SUPPOSED to be announced September 16, 2020, alongside the ‘Forerunner 745’. Well that did NOT happen. Instead Garmin just announced the latest ‘Forerunner’.

The ‘Venu SQ’ is supposedly delayed until month end (if not longer). Not good. Usually Garmin would have gone ahead & announced & then stated a 6-9 week shipment delay.

Maybe they realized that they have to go back to an AMOLED screen! WOW.

Yes, Apple ‘Watch Series 4’ pioneered ECG/EKG way back in 2018. This is, however, Fitbit’s first foray into this field. That it has got US FDA approval is BIG. Samsung is still struggling to get this approved on their new ‘Watch 3’. That must be galling for them.

The Fitbit ‘Sense’, at $329, is quite the watch. It has built-in GPS & all the latest health tracking features. Most impressive Fitbit ever — & it even has an AMOLED, always-on display with a 6-day battery life. This is quite the watch & it is $100 cheaper than the Samsung ‘Watch 3’. Hopefully I will get one, in October, from ‘Heart Rate Monitors USA‘ (HRM USA) to evaluate. I will keep you posted. OK?

What set out the Venu from all other Garmins was the bright, beautiful AMOLED display. And yes, AMOLED is a battery hog & that did not sit well with Garmin. Garmin likes to provide longer battery life at the expense of more striking screens. That is a problem.

But, abandoning AMOLED, in late 2020, on this type of watch is a mistake. With its shape it is going after the Fitbit Versa 2 & Apple. The Versa 2 has a great AMOLED display.

To compound matters there is also the new Samsung Watch 3 — with another v. attractive AMOLED display further augmented with a rotating bezel.

The Venu SQ will face stiff competition from these two. I will keep you posted.

It was amusing & very obvious. ‘Samsung‘ gave ‘Best Buy‘ precedence — & no doubt ‘Best Buy’ would have had to pay for it dearly. But, they only appear to have got a 2-day head-start.

That is good. I refuse to buy items such as this from ‘Best Buy‘.

Given the number of ‘Garmin‘ groups on Facebook — & I belong to many of them — I was surprised that there was NONE for the ‘Samsung Watch 3‘ which was announced yesterday.

The ‘Samsung Watch 3‘ has potential. NO, I haven’t got one yet. SMILE. But, I probably will in a few weeks after I double-, triple-check the reviews.

Many features that appeal to I. EKG & AMOLED display for a start.

I will, of course, keep you posted. IF you are interested PLEASE joint the group. It is FREE (for now). SMILE.

Click to ENLARGE and view. This was from Forbes.com but they cite the article XDA article referenced above.

True, this hasn’t happened as yet, and the Google Pixel 5 is not going to be available until October 2020. Based on what they have seen in the Android 11 code, so far, it looks fairly certain that Google will get this neat feature into the Pixel 5 (which would also mean that I will have to upgrade from my Pixel 4).

Yes, it is true that the battery in the Pixel 4 isn’t the greatest. But, the whole world knows that. Google will fix that come the ‘5’. Of that I am fairly sure.

So, what does this mean. Wireless charging of COMPATIBLE devices. Hold it close to a Pixel 5, which has the SHARE feature enabled, and you can get battery boost from the Pixel. Like jumpering a car. Neat.

But, the KEY question is compatibility. And that is what worries me, now that Google (pending the last regulatory approvals) owns Fitbit.

Will Google ever let Garmin be compatible? That is what concerns I.

Yes, Garmin now has Solar Charging and by Black Friday we should have that on the Fenix 7, the Instinct and the next Forerunner. That is all good. But, battery sharing will be more ‘powerful’, in every way, to Solar. Would be a bummer if Garmin is forever excluded.

Unlikely that Apple or Samsung will go out of their way to support Garmin with their, inevitable, variations of SHARE.

So, where will this leave Garmin?

I care. I love my Garmin watches (and yes, I have three.).