34 of those searches came to this blog.

Obviously, I only get a very, very, very small fraction of the total searches.

How desperate do you have to be to search on this.

But, if my topless posts help, I am glad.

Help yourself. Be my guest. Go to town.

From ‘NatG’ (above). Click to ENLARGE and read here.

I just got the November 2018 issue today and only had time to quickly scan through the article and BEAUTIFUL photos.

It is a topic dear to my heart since I have seen, first hand, this year, as to what is happening to TRIBAL LANDS.

The “Bad Ol’ Days” are back again with the Indians, yet again, with their backs to the wall.

My concern was what was happening at Canyon de Chelly.

The NatG article is mainly about Utah and “Bears Ears“.

Please try to read this article. Hence, this post. Thank YOU.

‘Threatened by the Outside World’ article — page 42. 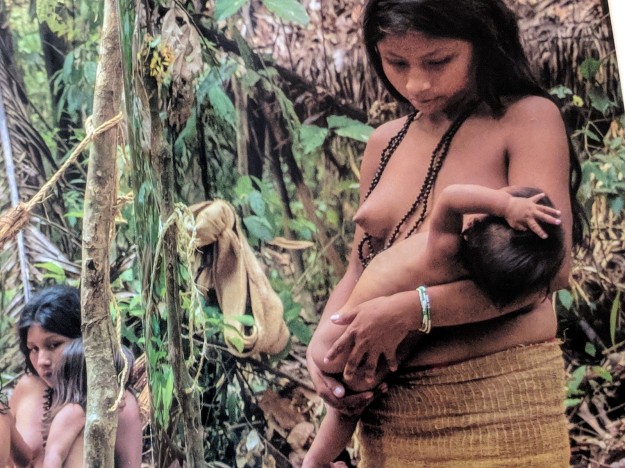 Classic and classical! Vintage National Geographic tribal topless from the 1950s. Cracked me up. As soon as I saw the article I had a sneaking feeling that National Geographic will include some Tribal Topless. I was right. Very blatant. No attempt to disguise it or make it less obvious. Right in your face.

First topless in National Geographic since the March 2018 issue — and the picture there was from a 1965 issue.

The last proper tribal topless was in the June 2016 issue. I had been concerned that National Geographic will stop the tribal topless now that ultra-conservative ‘Fox News‘ owns 73% of the ‘society’. Guess I need not have worried.

But, then there is also this. In March 2018 National Geographic apologized for its racist coverage of ‘bare chested exotics’ — i.e., tribal topless pictures. What fun. What hypocrisy.

Click to ENLARGE. The most obvious changes are on the spine. Here are April, May & June 2018.

I have been reading the ‘National Geographic‘ for about 62-years. I started, very young, in Ceylon, in the mid-1950s, given that my father used to have it shipped to him, from the USA, along with the “Reader’s Digest“. He had stacks and stacks of them on the floor of his extensive library. He and I both would help ourselves to one on the way to the bathroom. That, I confess, is where I still read both magazine. And I too still have active subscriptions to both those magazines along with the new ‘History’ magazine from ‘National Geographic’.

As of the May 2018 we now have a new design. The most striking difference is in the spine as shown above. They no longer have the name ‘National Geographic’. Instead there is the iconic ‘rectangle’. They have also gone an all numeric month notation; e.g., 05.2018 & 06.2018.

The inside is supposed to be more modern. It looks OK. Maybe a tad too fussy for my old eyes. But, it is readable enough.

The June issue came in a recyclable paper wrapper. No more plastic! That was good. That whole issue focused on the plastic problem.

They haven’t snuck in any topless pictures in the last two issues. I will, as ever, keep an eye and share with you. Promise.

Both of these were from Saturday, March 17, 2018 — St. Patrick’s Day. There were MORE. But, there is only so much white Australian bums that you can take.

This was the month, i.e., March 2018, that “National Geographic” apologized for all the topless tribal pictures it had published for the last 120 years.

The “Daily Mail“, cute as ever, covered that story with a huge tribal topless pictures — supposedly to illustrate the ‘point’, as if we didn’t quite understand. That was on March 13, 2018.

Four days later it went to town with ALL THESE white Australian bums.

I call them ‘bums’, but they are OK — meaning Australians.

Well, I felt honor bound to cover this. Now I have — though maybe not adequately enough because I feel I left quite a bit uncovered.

Click to ENLARGE if you must. Not much to see. But, this is a picture from “NatG” that the Daily Mail featured.

Click to ENLARGE and read here. Use link at top to access original. So, in this article the Daily Mail points a finger at “NatG” for doing something that it TOO has done. Cute.

As soon as I saw this article the ‘Daily Mail‘, this morning (while I read it, in bed, with coffee, as is my daily ritual), I knew, at once (at once) why I had been getting all these hits, on this glog, on the “National Geographic” tribal topless posts.

Cute. I was amused. Well, not sure about others, but I have been commenting on NatG’s partiality to topless tribal pictures for years.

What is ironic is that the “Daily Mail” is also as guilty! It published at least three tribal topless pictures in 2017. See below.

So, a classic case of the pot calling the kettle black.

Never mind. As far as I am concerned we, right now, have enough other, really major, problems to worry about — e.g., is Trump sane?

So, there are the three tribal topless pictures the Daily Mail published in 2017.

Front pages — “From the Editor“.

Click to ENLARGE. This was the interviews — “From the Editor”.

It was cute, at multiple levels, and brought a wry smile to my lips. Paul McCartney, you dirty dog.

Intriguing. That was his inspiration for “Lady Madonna“. I just checked the lyrics. See below. Yes, he does have “Lady Madonna, a baby at your breast“. Hhhmmmm.

Did he keep that January 1965 issue this long? Mary McCartney, in the photo credit, is his mother.

You just would have thought Paul would have seen quite a few OTHER breasts. Interesting.

As far as I can tell this is the first Topless in National Geographic since June 2016 — and this one, in the scheme of things, is pretty innocuous. But, I wanted to make sure that I did document it.

Interesting interview. I think I knew that he was a vegetarian.

I also think that I might be able to manage “Meat Free Monday“. Maybe I will start next week.

What amuses I is that the ‘Daily Mail‘ would have obscured the nipple (and some of the mammary gland) if she was NOT tribal. Here is a recent example of the Daily Mail being coy with ‘European’ breasts. That they make that distinction is disinegenous and insulting. Plus, it is (for pity’s sake) a British tabloid. British tabloids are expected to display females, topless. Jeez.

‘National Geographic‘, as I thought would happen under the new ownership, haven’t printed any in the last few months. If they have, it slipped passed me and I am fairly good and looking through each issue of the magazine — which I get, religiously.

So, there are the other 2017 tribal topless features from the Daily Mail.

Amusing. First ‘National Geographic‘ and now the ‘Daily Mail‘ — though it appears that NatG, under new conservative ownership, has, at least for now, stopped publishing topless pictures.

The first Daily Mail ‘tribal topless’ pictures were on April 22, 2017.

But, here is what is SAD and scary. Publishing topless pictures have been a STAPLE of the British tabloids since at least the 1960s.

But, the Daily Mail was acting REAL COY when it came to non-tribal women just 2-years ago!

I have no issues whatsoever with topless pictures or actual toplessness.

Culturally the British have not had an issue with topless pictures in tabloid newspapers either.

This was, of course, ‘National Geographic‘ territory. They have, since their acquisition by ‘Fox’, appeared to have stopped these pictures — just as I suspected.