I am surprised, but I think there is two factors at play — and the possible land mines per se isn’t one of them.

I think there are factions who want to show solidarity with the Browns given that paying taxes is not a popular pastime in New Hampshire. The other is the minimum $250,000 price tag. I think that is too high. IF I had any money I would make an offer to buy this place. Actually if anybody who has a say in this reads this they should contact me. I will BUY IT — for a price. The land mines worry me NOT. I know that the technology is available to have them cleared.

Also interesting that her dental office in prime Lebanon did not sell. Price again had to have been a factor.

That nobody sat in the 16 chairs provided for the potential bidders, to me, tells its own story. The good folks of New Hampshire do not want to be seen involved in this tax-evasion case. Good for them.

From the U.K. “Daily Mail” of course.

There is warning against POSSIBLE Land Mines — in New Hampshire!

Check out their information packed and rather well done Website.

I gather they have played to great acclaim at Cate Park before. I don’t think I have seen them. I am still kind of undecided whether I am really a major ‘Bluegrass’ fan. I can listen to it BUT it doesn’t do as much for me as other genres. Not sure what our plans are for Saturday evening. I realize, to my horror, that we have ONLY been to one concert at Cate Park this Summer and that was to see “Annie & The Orphans“. Much of this, if not all, has to do with conflicts with ‘Great Waters‘ concert — and yes, ‘Huggins Fair‘. I had hoped to walk over to Cate Park during ‘THE Fair’ but that never happened and I am kind of curious that no notes drifted across from the Park. I have heard Cate Park concerts while doing ‘Huggins’.

Anywho … just a heads up. Seems like a nice band. Enjoy. 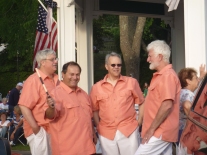 When we were at the heartwarming and as ever wonderful “Annie & the Orphans” concert last Saturday Deanna having done a customary, first-pass, tour of the Park came back all gushing saying “their is a band that you will want to see”. Deanna, plain and simple, knows what I like. She was referring to this notice she had seen next to the bandstand and taken a picture of to make sure that we had it for posterity. Of course she was right. I did not know of them but this was my kind of music. I am a sucker, of long and distinguished standing, when it comes to folk music and country. Throw in Western Swing and what is there NOT to like. Yep, I wanted to see them. But, alas and alack, I am NOT sure whether we will get to see them at Cate Park! Bummer cubed! But, I already checked their schedule. I will drive 2 hours, even to Maine to see them. I just listened to them on YouTube video (below). They gave me goose bumps. Wow. They are GOOD, good and GOOD. So, if you are within 40 miles of Wolfeboro, the Oldest Summer Resort in the U.S., on Saturday afternoon hoof it over to Cate Park. You will not regret it.

What can I say about ‘Annie & The Orphans‘ that I haven’t gushed about before. They were brilliant. Just plain, good ol’ fashioned, heartwarming musical entertainment by a very dedicated, committed and warm bunch of guys. Nice as apple pie. Perfect way to spend a perfect 4th of July weekend Saturday evening in Wolfeboro, N.H.

I started seeing them at Sandwich Fair c. 1998. Deanna thinks that she saw them at ‘The Fair’, where they were the perennial favorites for decades, even prior to that.

We saw them at Cate Park last year and loved. There was no way we were going to miss them this year.

Thank YOU, “Annie & The Orphans”. Bravo.

A photo montage from Cate Park
as a YouTube video.

Please watch. It will be make you smile.

This picture was taken, on an iPhone, by a lady from Virginia, who we had just met at the concert because her grandkids were playing with Teischan.

Part of my marriage vows was that I would dance with Deanna, whenever we could — even every day in the kitchen, if must, because Deanna loves to dance and feels that she was deprived of being able to dance as much as she would have liked. So I try to make amends.

I think they are the Cat’s Whiskers. I got to know them years ago when they were a annual staple at Sandwich Fair.

I will ‘walk’ a long way to see them. Last year, at Cate Park, they were so brilliant that they kept a huge impending storm at bay.

We have a crazy schedule this whole week, into Saturday (as we also did last week), BUT we plan to be there for “Annie and the Orphans” and I will, after the show, go and press the flesh with the boys. They are just a  group of men. Very uncomplicated fun.

Thanks Anatole. YOU are THE MAN!

Easily THE BEST, musically, of the four Summer concerts we have attended at Cate Park this Summer — in what was a dynamite series.

We knew that ‘Annie & The Orphans‘ are GOOD. We had seen them numerous time. They did not disappoint. If anything they blew past all expectations. They belted out all of the immortal rock’n roll classics from the 1950s onwards. The crowds loved them. We danced. The kids had a load of fun. Some got on stage. There were a lot of small American flags (which are a trademark of this very patriotic band). They had THE BEST sound system I have seen in many a year. A Bose sound system with three slim vertical speakers. Expensive but definitely worth the money.

Though the weather looked extremely dodgy I wanted to go. So we went. It looked so stormy that we didn’t bother to unfold our folding chairs. We wanted to be able to make a quick dash when the heaven’s opened up. So we, instead, sat on the retaining wall at the back. Wasn’t bad.

Good crowd. Nearly as many as for the previous concerts we had attended — and all of those had near perfect weather. That so many people decided to brave the threatening weather is a testament to how much the folks around here love this band — that has been performing for 49.5 years! Yes, the band will be 50 years old in 2014.

Around 7:40 we were sure it was going to come bucketing down. There were some rain drops. The umbrellas went up. Some people, alas, left. We got up to leave but I said lets give it a couple more minutes. The raindrops stopped. It actually kind of cleared up. We had lightning and one impressive roll of thunder. But, the band played on, undeterred.

They did NOT take the customary break at 8pm. They played on. So they played, non-stop, from 7 to 9. Annie was concerned about the weather and wanted to make sure the crowd got a treat. It payed off. A hugely memorable performance. We will all be able to say: We saw Annie & The Orphans in Wolfeboro when they defied the weather.

The Master of Ceremonies for the concert, though we didn’t know it till we got there, was our friend from Clearlakes Chorale, Robert Burns. That was good. We talked to him during and after the concert. I also went and thanked Anatole and some of the band members. Very nice bunch of people. We told them that we were sorry that they were no longer at Sandwich Fair. I am going to try and fix that for 2014. I will be calling them after this year’s fair to tell them that we want  Annie & The Orphans back.

So despite the huge black clouds we didn’t leave the park till 9:30. On the way back, around Robert’s Cove, it bucketed down. But, it was local. No rain by the time we got to Alton.