That was anticlimactic. Big Pixel 4 unveil and no Pixel smartwatch. Not to be deterred the diehards are now claiming that it is to be announced next week. Anything is possible, but this loos suspect. Today would have been the optimal time to make a big splash.

But, then again, you could argue that Google might not have wanted to watch to be overshadowed by the Pixel 4 and only get mentioned, in the media, in passing — the also ran.

Well, all we can do is wait and see. I guess they still have time. More than a month to Black Friday and Christmas is a month after that. 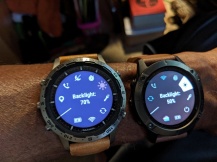 Yes, rumors of a bona fide Google Pixel smartwatch — obviously running ‘Wear OS‘ (i.e., Android for watches) — are again on the rise. This time though they might be close to the mark. Based on a patent that Google filed, there is also an expectation that this watch might sport a ‘hidden’ camera. Yes, you can get watches with cameras now, but Google, with its Pixel phones, have shown that they know how to implement a real ‘nice’ camera. A good camera, in a watch, can be a gamechanger and get a LOT of folks into a lot of hot water! Just think of what you could take pictures or film without folks having a clue what you are doing! Frightening.

Even a semi-decent Pixel watch from Google, without a camera, would be quite an event. Cause quite the stir. Heavy Android users that want primarily a smartwatch — as opposed to a activity/health tracker à la a Garmin Fenix — would have no choice to look at it. But, then you have the Samsung watches that a pretty good on both front — ‘smart’ & fitness.

It has been widely and credibly reported that Fitbit THE COMPANY is for sale and yes, Google has been mentioned as a prospective buyer. That would make sense, BUT Fitbit does not run Wear OS. And that is Google’s dilemma. Fitbit has the hardware, experience and most importantly a huge, loyal customer base. Google has the money. They could plough large sums of money into porting Wear OS to Fitbit. To I that would be what makes most sense.

But, from what I see we will not have to wait too long. IF there is to be a Pixel watch announcement, it will be within the next few weeks. Fingers crossed.

Ideally you would like Google to partner with Garmin (and I do happen to be a long-term Garmin shareholder). My druthers, however, tell me that this is unlikely. I can’t explain it, just a feeling. I just hope that Google doesn’t cut a deal with the ‘DEVIL’ — a.k.a. Fitbit. {Smile}

But, I have been thinking. Google, for obvious reasons, would prefer to work with a manufacturer who is currently using ITS ‘Google Wear OS‘ and has experience with Qualcomm SNAPDRAGON processors. ‘Misfit‘ fits the bill quite nicely — and they do make some impressive watches.

I, of course, can’t be sure, but Misfit is worth keeping on the radar.

I did look at the Misfit Vapor when considering an alternative to the Garmin Vivoactive 3 that died. It just didn’t have all of the fitness/sleep tracking features I was looking for. But they — especially with Google’s resources — could fix that.